Who Would You Choose? 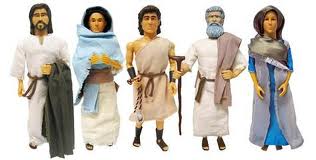 If you could spend an afternoon with someone from the Bible (excluding Jesus), who would you choose? Would you spend some time with Esther? Or Moses? Maybe Solomon or Isaiah? Perhaps you’d choose someone from the New Testament – one of the disciples or Paul?
This week the writers at Kingdom Bloggers are strapped into a time machine and headed back to the past to spend an afternoon with someone we’ve only read about. Join us this week and let us know in the comments whom you’d want to spend an afternoon with.
*******
When Linda suggested this for our theme, I didn’t even hesitate. I’d pick Peter because I relate to him. He had amazing insight about some things and other times, he was a buffoon. He loved Jesus, and yet he was quick to deny Jesus at his friend’s most crucial hour. Peter was a man of action, which he did often without thinking first. Peter got out of the boat and walked on water! Sure, we often talk about his lack of faith because he started to sink but where were the others? That’s right; they were still in the boat. Peter was the only one who got out of the boat and WALKED ON WATER!
If I spent the afternoon with Peter, I imagine it would go a little like this:
Me: When Jesus came by the marina and told you to follow him, what were you thinking when you left your boat?
Peter: I’d seen Jesus around; he seemed like a fun guy. I hadn’t spent any time with him before but when I saw him with others at the synagogue he was always making them laugh and I never heard one bad word said about him. He called me but actually I didn’t understand Jesus would be giving me a new job assignment. I didn’t know that I would be leaving my boat and career for good.
Me: What was the most shocking aspect of Jesus?
Peter: Jesus never got mad at me – frustrated, yes but never mad and I said and did some pretty stupid things. I’m a fisherman, you know, and not really educated. Jesus wasn’t educated in the temple either, he was a carpenter but he had an incredible presence that made people stop and stare. He was never self-conscious about it. He would always smile, especially at children. But I never saw him get mad at his friends.
Me: What were you thinking when you got out of the boat?
Peter: At first, when we saw Jesus coming towards the boat, I couldn’t believe my eyes. I thought maybe I was tired but the other guys saw it too. I didn’t even think, I just asked Jesus to let me come to him if it was him and sure enough, he said, “Come.” I got out of the boat and took a few steps toward Jesus. A lot of people speculate that I lost faith, but I didn’t lose faith. I let my pride pull me down. I started thinking, “Hey, I’m walking on water. I can’t wait to tell the guys back at the marina,” and that’s when I started sinking. Jesus grabbed me, though and it was nothing for him to pull me back up and hold my weight and his. It was like he was walking on solid ground. Amazing.
Me: What were your thoughts about Paul? It seems like you didn’t get along very well.
Peter: Paul was alright, but we’re complete opposites and all of us were afraid of him, because you know, he was trying to kill us. It takes a lot to trust someone after that, even though he was clearly filled with the Spirit. I respect Paul and love him as my brother but we work best if we were each going our own way. When he confronted me, I knew he was right, but I hated it especially coming from Paul, the former terrorist to Christians, you know?
Me: One last question, the Bible says that when you walked by, people were healed in your shadow. Does it always happen now?
Peter: Naw, the funny thing, I didn’t even know about it until later when someone told me. I am comfortable with the presence of the Holy Spirit but I never get used to him and take him for granted. I am still in awe of the power, just like the first time when Jesus sent us out. It is raw and exhilarating but the best thing is about the Holy Spirit is I finally understand some of the things Jesus talked about and I can share it with others. A lot of people heard Jesus speak before he died and not many of us understood it at the time but once the Holy Spirit came at Pentecost, it was like my mind became unlocked. It’s more exciting than the miracles.
What Biblical character would you like to meet?
Posted by Andrea York

Andrea...I loved this. It was filled with insight and humor.
It is so good to remember that these were "regular" folks like us.
I think when we realize this, their lives can actually be a more powerful example to us...as being reachable and believable examples. I am also so amazed when I read about his denial of Jesus and his beforehand attitude of " not me!...no way!. I can relate to that kind of thinking. Ialso, have often thought of when he saw Jesus, as he denied Him...he had to have felt so incredibly low.
I think this is going to interesting to see how everyone responds to this week's question.