When the Israelites crossed the Jordan, the Lord instructed that a representative from each tribe should carry a stone that was in front of where the priests stood who carried the Ark of the Covenant and bring it with them to set up a monument to the Lord as a sign for the generations to come. This week on Kingdom Bloggers, we are writing about our own stones of remembrance. Why don’t you read along and share your own stone of remembrance. Have you performed a physical act, like the Israelites, or do you remember through stories and testimony?
*******
Every year, I celebrate the greatest testimony for me that God exists and loves me. I celebrate and give God glory on my wedding anniversary - this year it was 15 years. 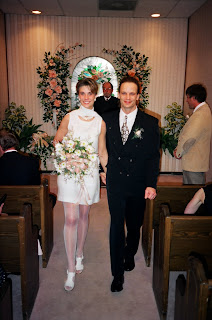 Nobody thought my marriage would last – I was young, we’d only known each other for less than a year and we were married in Las Vegas.  If that wasn’t enough evidence to expect a divorce in short order, we hit trouble just after our 2nd anniversary. I wasn’t certain we would make it to our 3rd year anniversary.
Around the same time, I began a Bible study by Henry Blackaby, called Experiencing God. Every Biblical truth I learned in the study was tested in my home life but I chose to put my faith in Jesus. I remember praying, begging Jesus to help us make it to the 7th year of marriage, when I knew we would have rest (according to the Biblical principal of Sabbath for the land). In December 1998 I was baptized with water, cementing my decision to die to myself and live for and with Christ.
The troubled year passed and we celebrated our 3rd anniversary by skydiving – a prophetic action to say it was all or nothing. Our marriage survived. I forgot about my desperate cry to the Lord, but he didn’t. One week after our 7th anniversary, we were offered an incredible living arrangement and job opportunity in the only suburban communities I would have considered if we were to move away from downtown Vancouver. It was the rest I had prayed for.
Every anniversary is a testimony to God’s faithfulness and good plans for me and my household, and it is my biggest stone of remembrance.
Posted by Andrea York

Andrea...
A beautiful testimony that you have lived and that I am sure that you and your husband will be ( if you have not yet been) called to encourage and come alongside married couples who are struggling.
" been there done that" is such a tired term but I know that I have cetainly benefited from counsel and wisdom of others, who have walked a similar road.
I also liked when you mentioned that you forgot about your desperate cry but He didn't...how true that is!
Linda Maynard

Good for you! Never let other people dictate the success or failure of your endeavors base on what they believe. With God at the center, "all things are possible."