Rocket Man...burning out his fuse up here alone. 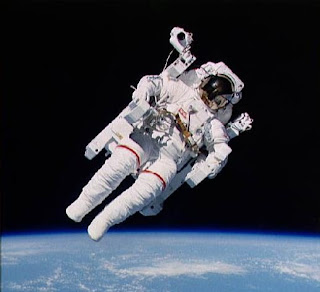 When Neil Armstrong stepped out of Apollo 11's Lunar Module in July 1969, I was sitting beside my grandmother watching on her black and white television. Although I was completely unaware at the time, she was dying from cancer and would take her own final trip just a few months later. I treasure that memory... and miss her today.
As far back as I can remember, I always wanted to be an astronaut. After a few flying lessons from a former Leatherneck pilot in an old cub prop plane, I was ready for the big show. I had it all mapped out. Through Vanderbilt University for commissioning in the USMC. Flight school. Carrier duty. Instructor School. Test Pilot Program. Astronaut Program. Space!
God had a different plan. I never made it to step two...vision 20-40...unacceptable for flight training.
Now don't get me wrong, I was crushed. But looking back at how NASA changed from the glory days of Apollo through the routine grind of Skylab to driving a space bus called the Space Shuttle, maybe my dream wasn't the only one that faded.

I changed majors from engineering to business after my flight school hopes were dashed. The USMC paid for my education, and in return I gave them five years of service. One more than I had to give. While I cherish my time and lessons learned as a Marine Officer, somehow I lost that enduring motivation to stay for a military career and left to go to law school in 1991...but I never went.

Being an attorney really wasn't my calling (though some would argue that fact) and in the midst of a very personal crisis, I never pursued enrollment in the schools that accepted me. There are absolutely no regrets in that statement...none at all.

Looking back at that fork in my path twenty years ago (something I rarely, if ever, do), it is far too evident to me just how immature around age thirty I really was. Shamefully evident. Serving God was not to be found anywhere in the picture of my life. Without going into dialog concerning eternal security, I can't help but wonder what would have happened if God had decided my time here was over during that dark phase. Thankfully...He didn't.

While I may not be living my childhood dream today, I am nonetheless living a dream life. My home is filled with love and happiness, my girls look forward to going to church each week and finding their own paths in God's will, and each night after a final word with my life's love, then one with my Father...I fall into a peaceful sleep realizing that if I don't wake up in this world the next morning...well...I'm a very, very blessed man.

You just don't need a spaceship for that dream.
Posted by Tony C