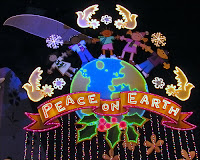 Peace… Peace on Earth Good Will to Men.  We see it on Christmas cards.  We may sing about it over Christmas.  We joke that some young woman in a beauty pageant will say that they want peace on earth.  It seems so elusive.
When I was a kid they used to say it was worse now than the previous generations.  I am old enough to remember the tumultuous 60’s.  I remember as a kid sitting in front of a black and white TV hearing someone say – we interrupt this broadcast.  First it was JFK, then it was RFK – MLK, or a riot here or there.  It was a terrible time.  I think it marked my generation in ways we cannot really explain.
Now we have the wars in Afghanistan and the ending of our involvement in Iraq.  It won’t get better in Iraq.  It won’t get better in Afghanistan and even if it did, something else would replace.  The Occupy group has not resorted to violence, but they might?  Frustration often leads to violence.
Regardless of where you stand on any of these issues, or what your experience has been, your politics, or even your religion, I think we all can agree that peace is just as far as it was on a Judean hillside.  Rome oppressed and occupied Judea.  People feared for the future.  Solomon was right, nothing new.  It’s always a variation of the same.  People oppress other people because of status, religion, gain, or just meanness.
How do we reconcile the reality of our world past and present with angels saying Peace on Earth.  Like the disciples who thought Jesus would usher a new reality, we also look for a new reality.  We look for the Parousia – the return of our Lord as the solution, as the time when peace will come.
That’s true.  Advent is about looking for our Lord’s return.  It will be better then.  But there is another truth just as real as the coming of the Lord.  It is that the Kingdom has already come.  Peace has already come.  Those of us who name the name of Jesus are supposed to be peace-makers.
On another Judea hillside, Jesus said – Blessed are the peacemakers for they will be called the children of God (Matthew 5:9).  I’m going to step on some toes.  Lift your feet.  Believers are called to peace, not to patriotic vitriol or talk of revenge.  We are called to turn the other cheeks, love our enemies and do good to others.


I watched a movie for class.  If you haven’t seen it, I highly recommend it.  It is called Radio and stars Cuba Gooding, Jr. as an intellectually disabled young man called Radio.  It’s based on a true story.  Toward the end of the movie, the coach, the man who befriends Radio – he says, Radio treats us all the time like we wish we treated each other even part of the time.  It seems simpleminded to love others.  It seems otherworldly to love your enemies and do good to them.  It seems immature and intellectually childish to turn the other cheek.  But what if we did?
What if we are supposed to be the agents of peace?  What if we are the ones who are called to lay down our hatred and love others?  Do you think as children of God, followers of the God who loves us so much He sent His son to be born in a manger and suffer the cruelest of death on a cross for US… do you think that we could be the ones who are supposed to bring peace?
Weekly Advent Bible Reading Plan:
Monday, December 12, 2011:  John 16:25-33
Tuesday, December 13, 2011:  Romans 16:17-20
Wednesday, December 14, 2011:  Galatians 5:16-23
Thursday, December 15, 2011:  Deuteronomy 28:1-14
Friday, December 16, 2011: Luke 2:8-21
Posted by Joyce Lighari