Every week my friend, Charli, and I go into several nursing homes to visit the elderly. We carry in with us some joy, laughter, singing, dancing, and a breath of fresh air. We wear colorful clothing and fun costumes and we go into the “Special Needs” unit where they are locked in. They are imprisoned two ways, by those doors, with their numbered codes, and by dementia and/or Alzheimers. Usually they respond to our cheery “Good morning!” with a blank stare.

Jesus said, “When you visit people in prison and when you visit the sick and bedridden, you are visiting Me.” (Adapted from Matthew 25.) Wouldn’t you like to visit Jesus today? The elderly in nursing homes would love to see you!

Thomas is one of the men we see each week. At first he doesn’t seem to hear you when you talk to him or even know you are there when you touch his hand. When we start singing some fun songs, like ‘Take Me Out to the Ball Game’ or ‘Oh Susanna’ some of the elderly will sing along right away, but not Thomas. He is in an advanced state of Alzheimers—trapped inside his mind and unable to have much interpersonal communication with others any more. One day we were singing our national anthem. We were almost done with the song, when I noticed Thomas was mouthing the words. Since he is hard of hearing, I knelt down by him and began to sing loudly.

“Oh say does that star-spangled banner yet shine…” Thomas continued to move his mouth and we began to hear his voice for the first time. By the last line he joined us in a full deep voice, “…And the home of the brave.” He not only was singing, he had lost his blank look and you could see in his eyes he was present and “back” with us for awhile. I stayed right close to him and we sat face to face. Thomas asked, “Do you visit often?” I told him we would be back next Wednesday to do some more singing with him. He said, “I will be here.” We laughed. His face relaxed and we chatted for a few more minutes. We sang a few more songs together. He seemed to know the patriotic songs, so I asked about his military career. He loved telling me about it. Thomas was out of prison for a little while. This is called, “Entry”. He had entered the present for a while.

The Alzheimers patient may not remember what he had for breakfast, but he will remember words to songs and know all the verses too! They have taught us words to songs and even extra verses we didn’t know about. If they played an instrument, you might see their hands moving as if they played their instrument.
Very few of these patients ever have visitors. I had one of the activity directors tell me that over 90% never have anyone come in to visit. One exception is Kay. Kay is 97 and her sister, Marguerite, is 90 and she visits her sister a couple times a week. They gave me permission to post their photograph and tell their story. They were not very close when they were young because of the difference in their ages. As they got older that changed. When you are an adult, seven years is not such a big deal. They became close friends and lived together in North Western Washington State after their husbands passed away. When we arrived Marguerite was passive and unresponsive. I noticed her “entry” as we sang an old favorite song, “We ain’t got a barrel of money, sometimes we’re ragged and funny, but we’re travelin’ along, singin’ a song, side by side.” 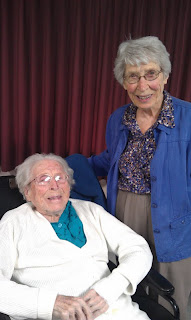 Marguerite rested her head back on the head rest of her wheel chair and looking right in my eyes she said, “Ah! I like that song. Would you sing it again?” It is hard to sing when you’re crying, but I managed to swipe at my eyes and take a couple of deep breaths so I could sing the verse. (This verse was actually taught to me by a man named Jefferey in another nursing home we visit.)

They’ve all had their quarrels and parted,
But we’re still the same as we started.
We’re travelin’ along,
Singin’ our song,
Side by side!

When her younger sister, Marguerite, came in to visit after Kay and I had been singing together, she was delighted to have time with her dear sister while she was “present”. She wheeled her off quickly to enjoy some conversation. She smiled at me and said, “Thank you!” It makes me so happy to remember this and spurs me on to do more sing-a-longs in nursing homes.

A woman named Doris was always very grouchy. She often asked us to leave or said mean things like, “You’re not singing that right—I think it is time for you to leave!” One day I noticed her hands moving as if she was leading a choir. I invited her up front and she lit up. As she led us in singing, as our choir director, she relived some happy memories when she was doing what she loved. Not only was she joyful and cheerful, she was present…let out of her prison for a little while. Doris died not too long ago and we miss her every week. It makes me happy to think we gave her some joy and fun to lead us in singing in the last days of her life. I know Jesus was smiling too!

May I encourage you to go into a nursing home and visit the elderly? Remember you are visiting Jesus!
Posted by Jenna Vick Silliman

You bring Jesus and show Jesus and that's the gospel! A ministry like yours bears much fruit and while some look at big names, God looks on this and smiles really big.

Jenna...
You are such a special loving person.
I too have volunteered at a Nursing Home and have taken a little Sabbatical and will return in September.
I manned a Shopping Cart, where I purchased small items for the Residents to buy.
Nothing was more than a dollar and they loved it
I took special orders too and sometimes the diabetics tried to bribe me to bring them candy made with sugar!
I went to Tag Sales and Salvation Army and Goodwill too.
I am not sure if you have a Christmas Tree Shop where you are but one of them remarked that she felt I was bringing Christmas Tree Shop to her.
The actual part that they really enjoyed was the company.
Can't wait to go back.
Lin

I love your zeal and enthusiasm for life. God is certainly using you to break the walls, be it social, economic, or in the case of your example - mental.

Be blessed and you continue to pour out your life by just being you.

Jenna,
You stirred my heart with your comparison of the Alzheimer's unit to a prison. What other situations are like prisons for unbelievers from which Jesus is calling them to be free? There are many. Your zest and love for people is so evident and compelling. Thank you!