How can I pray for you?

As a kid, I felt a duty to share the gospel.  The church I attended had regular street meetings and a "tract" rack in the narthex.  By the time I got to high school, I knew how to execute the "Roman Road."  I've shared a lot of this before here on Kingdom Bloggers.  Starting with ninth grade (which for me was still in Junior High) I became a member of HiBA - which stood for High School Born Againers.  As a member of HiBA, we had a vinyl red bible cover.  It was BRIGHT red.  For it's time, it wasn't a bad cover - but basically it was just a piece of what we once called oil cloth.  You covered your bible the same way you covered your books - a fold her and a fold there and slip it over the edges.

In stark white to standout against the bright red were the words, "THE WORD OF GOD."  Our "witnessing" technique was to carry our bible (covered in red) always on top of all of our text books.  I came remember feeling obliged to carry it, but somehow, I often slipped it to the bottom of my books.  Also, we had no lockers in that high school in Brooklyn NY.  That meant every textbook we owned was carried all day long and while hanging from the strap (for those of you who never road a city bus that is a strap that hangs down from a bar for you to hold on to while standing on a crowded bus) shifting arms because of the weight of that huge world history book, the math book, etc.

I remember going door to door too - just like the Mormons and the Jehovah Witnesses Andrea spoke of yesterday.  We'd knock on the door and go for the "sell."  That came when we had them repeat the sinners prayer.  A summer of witnessing was how I spent a hot summer between 8th and 9th grade.  It was funny, though we counted literally thousands of "decisions," I saw no difference in the attendance at church. Hmmm

I think that was where I first realized that these methods, while well intentioned, don't usually work.  While some may think me a heretic, I'm also not crazy about the repeat after me, say the sinner's prayer, and now your saved business either.  I've been on the other end of that situation too - I've had people come to my door and I had to convince them I knew Jesus - it wasn't easy!  I guess they wanted another notch in their salvation belt.  Okay, I know that was a bit sarcastic! 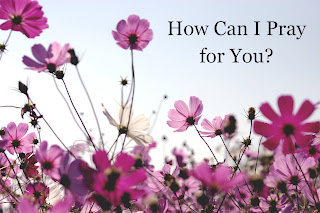 Recently I think I saw what does work.  I had read that a church I once attended had started going door to door - not for the "sell" but simply to say, is there something you would like me to pray for, for you.  Last week I was with a new friend in Memphis.  I've been with people before that asked their servers at a restaurant if they wanted prayer.  It doesn't always rub me the right way either.  But last week, it was different.

My new friend asked the server who had already shared with us that it was her first day on the job if she wanted prayer for anything.  As it came out of her mouth, it was so natural.  She simply said, "we are getting ready to thank God for our food, is there something we can pray for, for you."  Stunned, she said my new job. Then seeing our concern and sincerity (that's a key) she started telling us she had recently finished cancer treatment, she was new in Memphis, and seemed so touched that we cared enough to pray.

As we left, we decided we wanted a picture of our meeting.  My new friend found another young employee to snap the pictures - a young man this time.  As we thanked him, she said is there anything we can pray about for you?  Smiling he shared that he was trying to turn his life around and he needed all the prayer he could get.  Then he said, my mother's prayers have brought me this far, she is always praying for me.

We assured him we'd join in her mother's prayers.  I need to develop this skill.  It is so like Jesus.

This got me to thinking.  Did Jesus ever ask anyone if they were saved?  Did they keep the law?  Except for the "Rich Young Ruler" I can't think of anyone, can you?  Instead, you read over and over, that Jesus being "moved with compassion" healed the sick, touched the leper, forgave the sinner, and broke bread with them.  I think I like asking if I can point someone to Jesus who is more than able to do the same for them today, as He did then, is the best way to evangelize.
Posted by Joyce Lighari

Joyce...
Love it!
I know so much about you and yet I learn new things all the time.
I do remember oil cloth and book covers albeit red with white lettering about the Word of God. You know somehow I feel the Lord appreciated your sincere efforts as you and those around you thought that was the way to do it.
I can remember one of my friends, who in her denomination, had a quota to fulfill each year. She was pretty shy and it was simply torture for her. As a adult, she almost still could cry when she thought of that memory of how she felt she "failed" as a child.
Awww.
We all do the best that we can with what we have. I thank God that He knows my heart.
Lin

I've heard other people that do this and I'm always impressed - so simple, and yet effective.

The truth is, people want to know if there is a God, that he cares for them. We haven't always been great at sharing the message because it feels forced - even to us but living a lifestyle allows others to see the authenticity of the Christian faith.