Evangelism? Isn't That What Other People Do?

“Be ready to speak up and tell anyone who asks why you are living the way you are and always with the utmost courtesy”… 1 Peter 3:15…The Message
“Let your speech message, at all times, be gracious [pleasant and winsome] seasonal [as it were] with salt so that you may never be at a loss, to know how you ought to answer anyone [who puts a question to you] Colossians 4:16… The Amplified Bible

I have never been one who takes to doing “formulas”. So, for me use, for example, the Four Spiritual Laws format to present the gospel, would not be my way. (Note: there is absolutely nothing it, as it presents the clearly and succinctly.)
I was listening to a Christian radio station and a woman Dr/Author was discussing a portion of her book about evangelism. I caught the last 4 methods she mentioned.
1) Using apologetics
2) Giving practical aid to people and people groups, say in a disaster, and then presenting the gospel to them
3) Building relationships with people and then over time, talking about your faith
4) Going to their place of worship…discussing the differences between Christianity and their beliefs, while allowing them to keep their beliefs.
I disagree with this one, as I thought."How is that presenting the truth? The truth of the cross of Jesus Christ and that He is fully God and fully man? Many religions acknowledge Him as a great prophet, but do not consider Him, fully God and fully man. Where does that leave the central truth of Christianity of the cross of Jesus Christ and why He died? I couldn't believe that was even being presented as an option.”
I would not use apologetics as I do not feel qualified to do so. Even if I could, this method could become confrontational, which isn’t my nature.

So giving practical aid and or building relationships seem the most reasonable to fit my personality.
In addition, years ago, I had heard about people approaching strangers and either giving them a personal word from the Lord or asking them if you could pray for them in general or for healing. The more I heard about this method and the results people reported that they were getting, I said “Lord, I want to do that!”I have had numerous times that I have acted on what I felt was the leading of the Holy Spirit. It is scary (every time) but I still go ahead. I mean what do I have to lose? I know that I could face people’s mocking and anger, which I haven’t as of yet. Yet, I fully realize that I probably will encounter such, in the future. But will I be willing to pay that cost, so that another can be saved and spend eternal life with the Lord?
I heard a testimony of a well known Pastor in South Korea. He had been previously been presented with the gospel message and held disdain for the message and the messengers.
The thing that broke through to him was a young girl who wept, as she told him, unless he received the message of eternal life, that he would be eternally lost. Her heart, that was so in tune with the heart of God, broke through this man’s hard shell.

There has been something on my mind for a long time. I was brought up in a traditional denomination. Some of my family still attends the church that I did. Others fell away and don’t attend church. They probably still believe in God, but must be disillusioned, as to how church is relevant to them.
I am pretty sure most of them would acknowledge that they know ABOUT Jesus, just as I did. But hopefully would realize that I don't KNOW HIM.
So on that premise, I thought of writing a letter to them to talk about how I came to be “Born Again” (that very scary word for them). When you think of it, it's our own personal testimony. No one can ever take away. People can argue “points” and have opinions but they can never take away what we have lived.
Billy Graham once said that the majority of people (the % was very high) come to a personal relationship with the Lord, through people that they know. There is that relational aspect, whether by family, friendship or taking the time to build a friendship.
We'll see what happens. I will report on any response that I get. I must follow through, as the Holy Spirit won’t let me dismiss it. Oh yes, I am cognizant that they may be put off by it and just as Jesus says that a Prophet does not have honor with his own people. 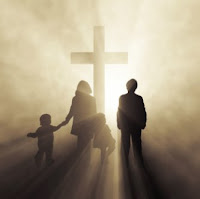 My family, so far aren't even sure what to call what Linda is involved in. It is rather humorous in that some in my family hold the attitude of " Oh yes...that's Linda...she has had some heartaches, along the way. We see how SHE "needs" religion."
Maybe using the letter method is a copout. It is the best that I can offer for now. I know is that I cannot leave the earth, knowing that I haven’t put the effort in, for the people I love.
I have to admit, I wish my passion was as deep as that young South Korean girl. I DO know that Jesus desires my family to KNOW HIM and the longing in His heart is deep.
I can picture Him weeping for them, can you?

As you live your life with authenticity, others will see the fruit and want to eat of it too.