Collision at the Cross

There are people who deny the cross has any meaning. They know that Jesus was killed on a cross--that is historical fact--but some believe that the act was a miscarriage of justice against a model of servanthood and integrity, nothing more. Sad that such evil exists in the world, they sigh, but what can you do, except do better and try harder to live up to Jesus’ example and command to love God and others.

But when I read the Gospel accounts--based on eyewitness testimony--and Paul’s Letter to the Colossians, it is clear that something powerful happened on that hill at Calvary beyond human means or reckoning. In Matthew chapter 27, several physical events are described: darkness covers the land from noon to 3, the hours Jesus was on the cross; at the moment of his death, there is an earthquake, rocks split and tombs open; eyewitnesses saw "holy" people who had died raised to life and come out of the tombs; and at the temple in Jerusalem, the veil (curtain) separating the Holy of Holies from the rest of the temple was torn from top to bottom. The veil was sixty feet in height and four inches thick. Back at the cross, the Roman centurion and other guards present were terrified as the earthquake hit, and knew instantly that Jesus was no ordinary person: “Surely this was the Son of God!”

In Colossians, my favorite of Paul’s letters, the apostle makes clear what is still murky business for some: the collision at the cross involved more than human agency. There is a clash of Titans, if you will: spiritual forces are battling, and only one side wins.

Paul argues that we must remember who Jesus is: The Son is the image of the invisible God, the firstborn over all creation. For in him all things were created: things in heaven and on earth, visible and invisible, whether thrones or powers or rulers or authorities (1:15-16). For in Christ all the fullness of the Deity lives in bodily form, and in Christ you have been brought to fullness. He is the head over every power and authority (Col. 2:9-10).

And then Paul explains that Jesus’ death defeated the very powers and authorities that stood in the way of our freedom to love and be with God: sin and death, which the earth had been cursed with since Satan tempted Adam and Eve in the Garden. When you were dead in your sins ... God made you alive with Christ. He forgave us all our sins, having canceled the charge of our legal indebtedness, which stood against us and condemned us; he has taken it away, nailing it to the cross. And having disarmed the powers and authorities, he made a public spectacle of them, triumphing over them by the cross (2:13-16). 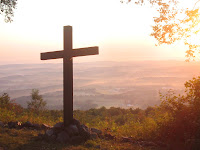 Something happened on a hill two thousand years ago of such power, that those present were shaken--literally. Each of us comes face to face with that same cross when we ask ourselves, “Is Jesus real? Does His death have any meaning for my life today?” Yes, because He lives! “You were also raised with him through your faith in the working of God, who raised him from the dead” (2:12). You don’t have to do better and try harder to be like Jesus: the Author of all life, the Head over all authority and power, gives you the power to live and love freely through faith in Him, through the Holy Spirit!

*The painting is by James Tissot (French, 1836-1902). The Confession of the Centurion (La Confession du Centurion), 1886-1894. Opaque watercolor over graphite on gray wove paper. Brooklyn Museum. In the public domain.

Kerry
'Nuff said...beautiful presentation of the truth of the Gospel.
Thank you
Linda