When you've lived most of your life on the razor's edge, it's really to filter through to a single event representative of God's protection. No joke. I lived life for the better part of 25 years pretty much wide open. Nothing seemed to scare me.

Looking back, I will admit that the sophistication of  extreme sports has increased dramatically in the past decade and a half. Good thing I was born when I was born...before the explosion of technologies and thus availability of crazy stuff like base jumping, competitive motorcycle stunting, wing suits, para-sailing and a few other loose-screw ideas available to the adrenaline junkie today. 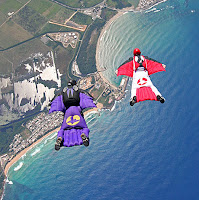 Then again, I did try to build my own hang glider as a teenager from PVC pipe and an old Slip-n-Slide. While the test run was fairly successful, the plunge from the top of the house resulted in several broken ribs, a broken nose (again) and numerous stitches. Sure looked good on paper...


Aside from my documented desire to be an astronaut as a young man, there was a hidden ambition to also work as a Hollywood stunt man. I would practice whenever and wherever opportunity presented Chevy Chase-like spills from tabletops, ladders and chairs. I had a running gag with a buddy where we staged him hitting me with his car that would send me tumbling across the hood (often resulting in abrasions and cuts). All just for a gasp or laugh.

One the most asinine stunts I used to pull involved roof surfing on a moving car traveling down the road at speeds in excess of 50 mph...with friends trailing behind in another vehicle! I'm embarrassed to even admit that today and shutter to imagine the mental damage that would have resulted in a car full of my friends watching as I had tumbled off and then they rolled over me in their moving vehicle. Dumb. Stupid.

Yep. Good thing my heyday was well after Johnny Knoxville started his video documented escapades. Many of my friends have often remarked that I/we were Jack*** before Jack*** was ever Jack***.

There's a lot more truth in that statement than I probably want to admit. I thank God daily His plan for me apparently involved something after those thrill-seeking younger days that unfortunately didn't end until well after the younger designation no longer applied.


My prayers today often focus on my middle child affectionately known as the Crazy Tomato in our home. It's a well established fact she's too much like her daddy. She's already planning to jump out of an airplane like daddy did when she's a little bigger...at age 10.


Lord. I need You in a mighty way.﻿
Posted by Tony C

I am so boring compared with you! Yeah, I would say God was protecting you so he could continue to use you for his purposes! But probably being a risk taker allow you to apply great courage in your walk. I have been more of a scaredy-cat at times. :)

Ok Tony...my heart was in my throat just reading this...yikes.
I guess it is times like this, when your parents ask ..."well what did you do today?" that you answer "Oh nothing!!!"
Glad you survived! ( a stunt man hum? lol)
Linda

Believe me Kerry and Linda...I'm most thankful for a praying mother!