You're Still the One

Someone once told me “yours is a great love story.”  It has taken almost all 34 years we’ve been together to realize that this person is right.  And it happened because of Valentines Day.


I was a single mom.  I was divorced after being abandoned by an abusive alcoholic husband.  I was living on welfare in a trailer trying to get a degree at the University of Missouri.  He was an international student from Pakistan who had only been here a couple of years.


We saw each other first at church.  He’d come with his adviser.  He’d sit in the front.  I’d sit in the back with my wiggly children.  Then one summer, both taking summer-session classes, we met over the soda machine in the Commons.  A daily hello and a smile was followed a week later by him asking to join me as I poured over my Spanish text.  Two hours later, our engaging conversation resulted in my saying yes to a date that weekend.  We’d watch a Bollywood type movie (before Bollywood was big) with English subtitles.  My children would come along as “chaperones.”


He bribed the chaperones with large bags of candy.  He won my heart that night.  Yet, a few months later, I ran.  My brain said no even though my heart said yes.  It was a very snowy day in Missouri in early February.  There was a mounting pile of snow.  The University shut down.  I was home in the low-income projects having upgraded from the trailer.  I was cooking tomato sauce.  The kids clamored as the knock came at the door. 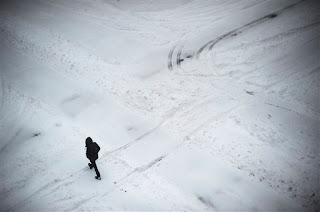 I’ll never forget the sight of him.  He was shivering.  The weather was hard on his skinny Pakistani bones.    He had bags in his hand.  Inside were three small Valentine candy heart boxes for the children.  There was a larger one for me.

In astonishment I said, what are you doing here?

He said, I didn’t want you to not have anything for Valentine’s Day.

I followed up with, how did you get here? He said, I walked.


WHAT??? You walked?  You walked three miles in a foot of snow?

Of course by this time he was already in the apartment and I was worried he’d die from pneumonia. My head spin, now what?  Could this be the love of life?  Could I dare trust a man again? And there were other issues, so many issues...


He shared supper with us.  I said: Yes, and within a few weeks I said, I do.  We’ve had a lifetime of joy and sorrow, pain and gladness.  He took on three children, loved them, and raised them with me as we added five more children of our own.  He’s not perfect.  Neither am I. Nor is our marriage. But we are in love and we're still together.


All the odds were very much against us.  No one thought we’d last.  No one saw any hope for this odd couple who were now Mr. and Mrs. But they were wrong.  We both thank God for our lives together.


I don’t make New Year’s resolutions but at the beginning of this year I made a decision to be more thankful for the wonderful man I married.  He is a good man.  He’s been a great father to our children.  He’s a blessing.  He deserves honor.


We have two songs – at least I think we have two songs, he didn’t stay as romantic as he started J.  The first one is the one I walked down the aisle to when I said “I do.”


The second one is one that sums up our life in many ways:

Joyce...
You sure do have a wonderful man.
What a beautiful thing that your husband did on that Valentine's Day.
I feel the love that brought you the candy, was so much more intensified by the fact, that he didn't leave your children out. That speaks volumes to me.
You are a blessed woman AND he is a blessed man.
Lin

Yours is a beautiful story; not perfect, as no marriage is, and yet after 34 years the love between you has grown and honored God. I say, "Amen!"

oh, i love this story! such an awesome thing from GOD!!

I love your love story Joyce! And I love both of those songs too. Yes, we must love and appreciate our husbands.

Many of the children at our school have families from India or Pakistan. I'm getting to learn names like Aakash and Aadarsh, etc.

I love reading your story Joyce. It has God's fingerprint all over it.

Blessings to you and your family.