"...to defend against all enemies, foreign and domestic." 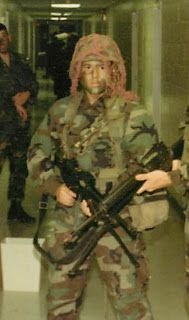 Warfare is a subject matter I'm unfortunately adept to address...


From all recollections, I always wanted to be a Marine. While my preferred path of fighter pilot to space shuttle astronaut was derailed by a refractive defect in my eyes resulting in viewed images falling short of focus on the retina (read myopia), I still pressed on in pursuit of a commissioning in the storied Corps.

That dream came true June 7, 1986 on the campus of Vanderbilt University with my family as witness.

Being a military officer requires a tremendous amount of study in the tactics and strategies of great military leaders of the past. In the words of George Santayana:

"Those who cannot remember the past are condemned to repeat it."

While there were required readings on the matter, I took on a personal 'extracurricular' interest in the people that history has judged as great military strategist. To this day, there is a copy of Art of War by Sun Tzu and The End of an Empire  (about the role of Attila the Hun in the collapse of the Roman Empire) on my office bookshelf.

Many of the same principles applied in order to maximize the chances of success in combat can be directly related to the spiritual warfare that all of us wage. Don't take for granted that all is appropriately applied here. Souls are in the balance each and every day, and ultimately, will spend eternity in only one of two places. As an obedient soldier for God, my job is to be ready to serve when and where He wants...and how He wants as well.

Being ready are the operable words. I can only be ready if I properly train. Prepared. Know my enemy. God's word tells me I'm much stronger with others at my side, so that involves coordination and effective communications. The underlying foundation to all this is commitment. War is never easy. Never fast. Disciple is required and that disciple must be driven by unwavering commitment. 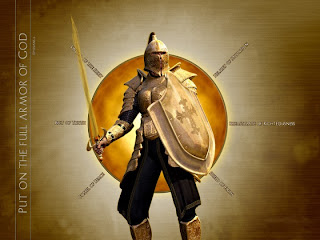 So what exactly is my role in the spiritual warfare being fought? Well, I've been promoted to higher rank as my commitment and experience have both aged. I'm no longer an all important grunt or foot soldier fighting the one-on-one battles in a microcosm of the larger war. I'm now expected to lead others...not by barking or threats but rather by my example. If I expect others to be prepared, I must be even more so to demonstrate how important the principle is to our ultimate goal.

I can't afford to forsake the assembly thereby marginalizing the importance of the church in God's plan. My knowledge of Scripture must be second to none and always growing, and I must be quick with the Truth and even quicker to carve out the damages caused by deceit and deceptions.  Knowing other eyes fall upon me, I must be forthcoming with my failures and sincere in my pleas for forgiveness. I must be also diligent in offering forgiveness and loving support to someone who has stumbled.

At no time should I seek glory or even acknowledge accolades for myself because it is written that
Pride goes before destruction, a haughty spirit before a fall. All glory goes to the One I serve...for only He is truly worthy.

Even though (and unlike any other battle before) I know the final outcome of my efforts are based on an unbreakable promise, my resolve must be to fight and lead with all my might until my last breath closes my life here and starts my life eternal with Him.

I have been commissioned by Him...I must and will serve with honor.
Posted by Tony C

Tony...
" I am now expected to lead others...not by barking orders or threats but rather by my example."..."knowing other eyes fall upon me, I must be forthcoming with my failures and sincere in my pleas for forgiveness."
The words that you penned, display to me, a great leader...the "real deal"
Thanks for sharing
Linda