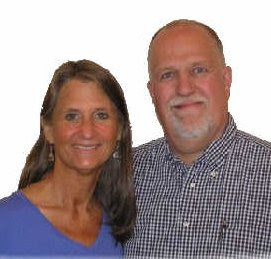 I already knew Cliff was the one for me. God had told me I was going to marry this man, months and months prior to Cliff getting the message, but I persevered. Cliff proposed on Christmas Eve 1979 at San Gregorio Beach, about a half hour South of San Francisco. I ignored the sign that said BEWARE OF DANGEROUS CLIFFS and waited for the romantic moment. The rain stopped, the clouds parted, and a single sunbeam shone down upon us. I waited. Cliff turned to me and said, “Will you marry me?” Now you have to understand I thought every marriage proposal consisted of the guy getting down on one knee, but I was soon to learn the lesson that this is not standard proposal procedure for everyone.

Later I asked him why he didn’t get down on one knee. Cliff explained that he didn’t want to get his dress slacks dirty on the wet sand. Makes sense now, but at the time I was confused. Almost 32 years later he still teases me about how I didn’t know he was proposing.

There are many good qualities in the man God gave to me. Here are 10 things I like about my husband, Cliff Silliman.

1. Cliff is DEPENDABLE. If he says he is going to do something, I know I can count on him totally.

2. He is PROMPT. Cliff feels it is honoring to another person to arrive at least five minutes prior to the arranged time. We have a clock or two in every room of our home, but it is still a struggle for me to be on time—I’m just not a clock watcher—but I AM getting better at it, thanks to my dear husband. I was late to get engaged and he’s never let up teasing me about that either. Hahaha!

3. My husband is a COMMUNICATOR. He likes to share insights into God’s Word, what’s going on in the world, and/or his latest bowling experiences. Anyone who knows Cliff, knows he likes to talk! I couldn’t have married a man who was shy or quiet, because I like to talk too. One of my favorite things is when he shares at church meetings and the Holy Spirit works through him. Cliff can get quite fired up and start preaching his heart out. It’s awesome when that happens.

4. Cliff is a STORYTELLER. I like that! I think stories capture people’s attention and communicate a lot of information in a fun way. Cliff tells stories about his colorful past; growing up in California in the 50’s, drug dealing on Telegraph Avenue in Berkeley and being a Hippie in the 60’s, growing with God in the Jesus People Movement and living in Christian community with a bunch of Jesus Freaks in the 70’s, married life with me and father to eight in the 80’s, 90’s, and to present day!

5. My husband is a STEADY going guy. I can be quite changeable. I like to say “It is a woman’s right to change her mind.” Cliff is a good match for me and God knew it. I am right brained and in the creative flow and daydreaming. Cliff is left brained and sticks right to his routine and his logical thinking. I like to be spontaneous and he is a planner. I don’t always think things through, but Cliff ponders the outcome of his choices. Cliff plods steadily like a horse to the plow and I like to run full steam ahead, back track, make a couple of loop-de-loops, and then sit and daydream awhile. He puts up with me so well.

6. Cliff is a HARD WORKER. What a good quality! He has provided for our big family for all these years and even worked two jobs when necessary, so I could be a stay-at-home mom with our eight children. (Four are grown and on their own now, so we only have four sons at home now.)

7. I like to joke around and have fun and laugh and be a big kid, so I’m thankful God gave my husband a good SENSE OF HUMOR. With a last name Silliman, you can’t be too serious!

8. Cliff is AFFECTIONATE and likes big hugs and to cuddle and well…you know…to be romantic. (Despite his stunt on the cliff of San Gregorio Beach when he stood up for his proposal.)

9. My husband is excellent at MAP AND MATH USAGE. He takes care of all that left-brain stuff. He enjoys figuring out directions and doing all the accounting and the business stuff in our lives. Yay! (I had my own checkbook for a few months and made a royal mess of it and I have a hard time finding my way back to my car when I go to the grocery store.)

10. Cliff LOVES GOD with his whole heart and mind and strength! He has dedicated his life to following Jesus and has an unshakable faith.

What an awesome man I am married to! Happy Valentine’s Day to you, Cliff!!!

It is interesting in what others see in you. I am thankful to Christ that He put all those qualities in me so that I could keep up with you.

Thank you for honoring me with this blog. I was totally surprised.

It's a wonderful tribute. Thanks for sharing.

Nicely done, Jenna! You helped us get to know him. Eight kids??! They should be writing tributes to both you and Cliff :).

Jenna...
What a delight to get to know Cliff through your tribute.
Oh boy, do I relate to being right brained with a left brained spouse. I loved the way you described him as a steady force in your life.
I also chuckled at your description of going forward, doing loop de loops and going back to square one so to speak.
God bless your union even more.
Linda
PS...I did think...wow that is amazing about both you and Joyce having 8 children...blessed families!

I busted a gut on #9! Rare qualities indeed...but men never will admit that. Thankfully you can vouch for Cliff.