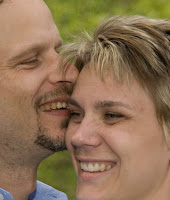 There isn’t anything my Man can’t do. He can build houses, customize anything, make an impressive omelette (anything with eggs), play music, be a marvellous father, converse with anyone, and give an awesome backrub.
He was different than anyone I had ever dated; usually I was attracted to the pretty boys – the ones who are nice to look at but useless. And then I met my Man – good looking and ability. He came into the coffee shop where I had started working every day. He was always the first customer in on his way to work and he always stopped by on his way home from work (we both lived and worked within a 2 block radius). I was surprised when he asked me to go for a drive in his friend’s ’66 Mustang but I said yes because I [used to] try anything once. Less than a year later, we were married – Vegas style.
My Man loves me so much it’s ridiculous. I think it has a lot to do with the year we almost didn’t make it. By God’s grace, we made it through one helluva valley and for all the love I didn’t receive then, my Man makes up for it now, in 100 different ways than I would have expected.
I used to buy into pop culture’s idea of romance – chocolates, lingerie and walks along the beach. My Man has never been like that. He’s not one for moon-lit walks on the beach or romantic scavenger hunts. Instead of lingerie, my Man buys me power tools when I say I need a drill – really good power tools because he’ll only get me the best. When I’ve been a little stir crazy because I need more social interaction than he, he’ll suggest I call up a friend for a girls’ night out. Or when I ask yet again to go to a weekend conference he’ll agree to stay home and watch the Boy.
My man is so agreeable to anything I suggest or want to do that when he finally does say no, I listen. He has fantastic perspective and insight and if he doesn’t think it’s a good idea, I trust his judgement. Speaking of trust, not many men trust as wholly as my Man trusts me. I’m not talking about fidelity (although that is part of it). My Man isn’t a confessing Believer [yet] but when he wants to discuss a stressful situation and I say, “God said not to worry about it and to trust him,” I don’t know too many spouses who would respond and say, “Okay.”
If all that wasn’t enough to make me the luckiest woman alive, my Man understands and buys into my handbag obsession. Now that’s love.
Looks like we made it.
Posted by Andrea York

Andrea...
Oh...the power tools, I can relate to. Marcel was probably the most excited when he suggested and then bought me my own tool set. He watched, with a smile on his face, when I used the cordless drill for the first time.
Sounds like you have a "keeper" and the two of you are blessed to have each other.
I too, trust the "no" of Marcel...he has excellent discernment, wisdom and caution, when I have sometimes barreled ahead...headed towards who know what...but God knows and He knew who I needed.
Thank Andrea...blessings to you both
Linda

Love it! Unsentimental, honest and loving. Thank you, Andrea.

True love doesn't try to change who you are...just accepts. I love your story Andrea. Warmed my heart.