"Today you will be with me in Paradise." 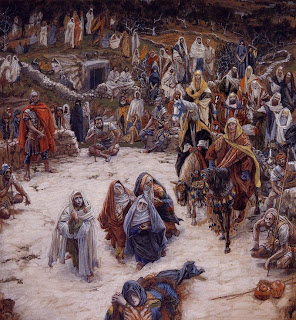 Paul Miller, in his book A Praying Life, describes Jesus' amazing ability to have a one-person focus even in a crowd: “When Jesus interacts with people, he narrows his focus down to one person... that person is the only person in the room. The way he loves people is identical to the way he prays to His Father. This one-person focus is how love works. Love incarnates by slowing down and focusing on just the beloved” (Miller, p. 46).

Astoundingly, Jesus manages this even on the cross. He is in agony. Nails have been driven through his hands and feet. Earlier, he had been scourged (for a description of the physical torture Jesus would have received as a prisoner, click here). But his agony is more than physical: for the first time in his 33 years, he is separated from his heavenly Father (see Matthew 27:46).

He has been abandoned by his disciples. The Jews who had welcomed him just days ago with praises, are now heckling him. Jesus is even jeered by one of two thieves hanging from crosses on either side of him.

One of the criminals who hung there hurled insults at him: “Aren’t you the Messiah? Save yourself and us!” But the other criminal rebuked him.
“Don’t you fear God,” he said, “since you are under the same sentence? We are punished justly, for we are getting what our deeds deserve. But this man has done nothing wrong.” Then he said, “Jesus, remember me when you come into your kingdom.”
Jesus answered him, “Truly I tell you, today you will be with me in paradise" (Luke 23:39-43).
Jesus’ one on one ministry extends even from the cross! The thief to the left wants down from his predicament and curses Jesus for not fixing things for himself and them. Even in the face of death, this man’s heart is hard and fixed. The thief to the right sees the reality of his own sin and the innocence of Jesus. Not just his innocence, but his divinity. What faith to see God in this suffering, blood-covered man. What depths of love our Savior had for a repentant criminal. What hope for humanity, that it is our faith in Christ, not our works, not a religious process, that saves!

“Christ upon the cross, is gracious like Christ upon the throne. Though he was in the greatest struggle and agony, yet he had pity for a poor penitent. By this act of grace we are to understand that Jesus Christ died to open the kingdom of heaven to all penitent, obedient believers. It is a single instance in Scripture; it should teach us to despair of none, and that none should despair of themselves; but lest it should be abused, it is contrasted with the awful state of the other thief, who died hardened in unbelief, though a crucified Saviour was so near him” (Matthew Henry).