This week KB is asking its writers to choose a country we would work in as missionaries for six months.

I wouldn’t have to go very far. 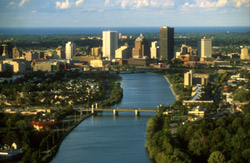 We live in a quaint village along the historical Eire Canal. Three seasons a year, I can walk along the canal, soaking in nature, crew teams, pleasure boaters and lots of shops and restaurants. My teenage daughter can walk home from school and spend a Saturday afternoon at the local Starbucks or the library. It is idyllic.

But not nine miles from us is the crescent of Rochester, New York, a swath of geography across the city, east to west, throbbing with violence, drugs, and poverty. The high school drop out rate is the highest of the largest city school districts in the state: 45.5%. In our town, 98% of students graduate from high school, and most then attend college. Rochester is known as one of the ten smartest cities in the nation because of top colleges, yet its public schools are fraught with problems.

To live in the crescent would be out of my comfort zone. I like knowing my family can go to sleep without bullets flying through the walls, and not having to address the issue of a crack house next door. But the problems of our nation’s cities, like Chicago, Hartford and Rochester, require a radical mission.

There are many churches in the city, including Brighton Presbyterian where my husband and I work and minister. But the problems of neglect, drug abuse and poverty can’t be fixed just by Sunday church attendance or even a weekly Bible study. Something more radical is required: ongoing prayer, mentoring, dedicated outreach and perhaps a live-in situation.

Nearly two years ago, I met a couple who are not only living in the city, they have dedicated two decades to raising other people’s children in a Saturday program called Bethel Express, which they now base at our church. Its focus and mission is on what its leaders call the "S Factor: Spiritual Strength, Social Stability and Scholastic Success." Children can begin the program between the ages of 6 and 12 (but no later) and the volunteer leaders feed and mentor them every Saturday until they graduate from high school. The program has a nearly 100% graduation rate. The adult volunteers love, encourage, and pray for these children for years.

Another couple I know established an inner-city healthcare ministry called His Branches 35 years ago, choosing to live just two blocks from their medical practice. The neighborhood has drug dealers, robberies and the occasional shooting. Eighty percent of HBI clients are at or below the poverty line.

We also know of three families who have made the decision to live in a tough area to make a difference in the neighborhood, and to be part of their church’s efforts to “re-neighbor” broken communities: 441 Ministries.

I do have a dream missionary trip (Ireland; Bible studies in a pub). But for me, the radical mission next door causes me to tremble.
Posted by Kerry Luddy