The topic for Kingdom Bloggers this week is how technology has benefitted our spiritual lives.  While not an active Kingdom Blogger anymore, when I saw the topic I jumped at it.  The other bloggers were gracious enough to let me guest blog and even asked me to lead off the week.

So why was I so anxious to write about this topic? 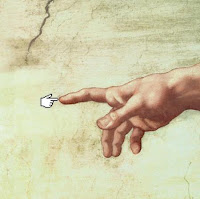 Back in the mid-90’s, I was hungry for God.  I heard and read on the internet about God’s spirit moving in various parts of the world.  I wanted God and I couldn’t travel.  Since God is everywhere, I prayed He’d show up in new and powerful ways in my own life.  What I read caused my spiritual mouth to water.  I kept reading.  One day, I read a post from someone in Connecticut (where I was living at the time) who had been to a spiritual hotspots.  The shyness I have in the real world is absent in the virtual world.  I emailed him.  He was a pastor in a church about 35 miles from my home.  He answered me!  Then we had a live chat on AOL – yes, this was the mid-90’s!

That contact ultimately led me to Lin Maynard and David Johndrow.  Lin became as close to me as the sisters I don’t have.  Time and distances have changed our relationship and we miss our frequent coffee and lunch meetings.  Later, I went to Norway on an amazing mission trip with this pastor in 2002.  Lin was the one who first told me about the trip.  On that trip, I met David and he became a lifelong friend.  David ultimately convinced me to be a Kingdom Blogger!  I often hear David’s echo saying – write that book!

My life was rearranged in 2008 when I moved for a three-year sojourn to the spiritual and emotional wasteland of South Dakota.  You can read about my struggles in my blog, Storehouses of Snow.  Once again, the virtual connections saved me.  Chats with friends, encouragements, and nudgings – even an occasional poke renewed the smile on my face.  David convinced me to blog.  Lin’s emails cheered the dreariness and let me know that she was a forever friend.  Other old friends would daily Skype with me.  Technology was my savior from isolation and its twin sister depression.

All these experiences gave birth to what would become a research project.  I’m a nerd.  I love school.  If you read this blog in the past, you know I went back to school to pursue a doctoral degree.  Well, I made it!  On May 4th I’ll officially be Joyce A. Johannesen Lighari, EdD.

In God we trust; all others must bring data.  W. Edwards Deming

Data and research sum up the last three years of my life.  What did I find from this research?  My research produced data to support the positive impact of “Internet-Mediated Social Networking” (Facebook) on spiritual growth and development.

I always knew that technology had affected my spiritual growth!  It whetted my spiritual appetite and at times gave me just what I needed to go on.  It also gave me precious contacts and friends.  I knew that – but my story was just that, my story.  Was I the only one?

Three years of data collection and research now shows what I knew to be true – technology, particularly the internet and social networking cause Christians to grow spiritually.  It might surprise you, but the group that showed the most growth was not the face-to-face Bible study participants, but the virtual group (one was even led by David Johndrow!) showed the most significant growth.

It has been said that when history looks back at the development of Web 2.0 it will be compared to Guttenberg and his printing press.  Others have said Web 2.0 is as significant as the discovery of fire. Guttenberg’s invention spurred the Reformation and changed Christianity.  What will Web 2.0 ultimately do?  It is too early to tell.  But, a small research study by a woman passionate for God has shown that technology does have an impact on a person’s spiritual growth and development.

In God I trusted; now I have data.
Posted by Joyce Lighari

Hi...
I feel like I have been witnessing a long labor and YOU are the one who persevered to have this "baby" come to fruition.
You should be so proud of yourself.
Just this morning before I read this, I thought "How on earth did Joyce do it driving back and forth from SD to TN? I still don't know but that is strength and determination.
I am SO glad we connected and yes will remain a forever friend.
It is because of your faith and confidence in me that I even am on Kingdom Bloggers. I know I will never be a tecky( sp?)...maybe I am a teckette...all I know is that have come long way and you have helped me so much.
I am proud of you...I KNOW the Lord is proud of you...aND you SHOULD BE PRETTY DARNED PROUD YOURSELF.I know you dad is smiling!
Love ya Lin
PS...Hope you will be writing more regular