I have been known to cry when a military band marches by in a parade.  I’ve never known why I do this and usually try to hide it.  Somehow my emotions are always stirred at the sight of soldiers marching.  I’ve lived long enough to see patriotism be unfashionable and see it return.  I guess I’ve always been patriotic.  Even during the turbulent years of the Viet Nam war, I remember wearing a pin that said love it or leave it.  I was young and probably didn’t understand all the nuances of politics; I was just patriotic.
When I heard the topic for the day, I thought hmm, that’s a hard one for me.  Even though I’ve always been patriotic, I don’t remember Memorial Day (or Decoration Day when I was a small child) as a significant holiday.  It was a day off of school.  It was the first Sunday I’d sit alone in Sunday School as all my friends had fled with their parents to their beach houses in Long Island.  We had no car.  We had no beach house.  We rode the Subway to Coney Island for our beach experiences. 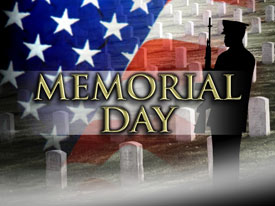 My great grandfather (or maybe it is my great, great grandfather) fought in the Civil War.  At least we think so, that side of my family history is murky including stories of horse thieves during the same war.  My father was in the “great one” – World War ONE – yes, I did say father and did say WWI.  He was a young Merchant Marine sailing on a Norwegian vessel when a German sub took them down.  During WWII he was too old to serve.  However, he was block warden and made sure everyone observed the black outs.  I have uncles and cousin who are Veterans.  My oldest granddaughter served for a short time until a broken bone sent her home.  I see the faces of children I taught in Sunday School who are serving.  I read the laments of spouses of these same children as their husband’s go to war now sanitized with terms like deployment.
I honor all of them today.  While in my heart I think I want to be a pacifist, I am conflicted.  Regardless of politics or religion, I still tear up at the sight of a Veteran’s cemetery.  The graves so erect speak of the soldiers who died for my freedom.  I wonder why freedom always comes with that price.  My spiritual freedom was also paid with death.

Memorial Day also makes me think of Eben-Ezer.  Playing on 53rd Street I could see the sign every day that said Eben-Ezer.  It was the name of the Norwegian language church across the street.  My father went there often for special meetings.  Eben-Ezer literally means stone of help.  It can also be translated “thus far the Lord has helped us” or in KJV, ” Hitherto hath the Lord helped us.”  Often we read in the Old Testament of stones of remembrance.  Eben-Ezer was such a stone.  It was a stone placed to help people remember God’s help.
Memorial Day is a day we decorate the stones of help, those erect graves standing in Veteran’s resting places all across the country and world.  American blood was spilled and is still being spilled with the goal of bringing freedom.  Let us pray that our leaders will make wise decision because the “Eben-Ezer’s” that line our cemeteries are a very high price to pay for freedom.
Posted by Joyce Lighari

Thanks, Joyce. So much to think about. I think I will do that. Inspiring.

I drive by the National Cemetary at the local VA when I go and never fail to pause and think about the veterans buried there killed either during a war or as an after-effect of being in combat.

There are a lot of markers...an awful lot.

Joyce
Lots to think about.
I just read a piece in the New Yorker about the price many soldiers from Iraq and Afghanistan are paying.
This article is about physical but mainly focusing on the mental consequences.
They were saying this war is similar to Vietnam in that, who is the enemy is not evident.
Another thing I had not thought of was many of these soldiers are in the Reserves and so they return home after serving and not to a Military Base...so they are thrown back into society without the support of comrades, so to speak.
The article followed the story of a man who was a medic and a surgical assistant and now cannot do that type of job because of a numb arm...he takes numerous medications for pain and depression, anxiety, sleep aides...it is so sad. He doesn't like to go out in crowds. he lives in New York and leaves for work REALLY early to avoid people and when lunch time comes, he either orders in or runs across the street to pick up lunch.
He had a girlfriend, but she could not handle it.
I have mixed feelings too.
Marcel missed going to Vietnam because of a back surgery he had. I have to say I was very relieved. I thought of a crazy thought, as he had terrible allergies at the time...that he would be sneezing in the jungle all over the place and give his position away.
My friend from High School, John was one of those who was spat upon and called a baby killer at the airport when he returned. I guess it's because of my era, I feel especially sad about the Vietnam vets who are druggies, alcoholics, homeless etc. I wore a bracelet with a name of a soldier I didn't know from Viet Nam. It was a project that they had Nationwide that they offered these bracelets.
When Marcel and visited the Wall in D.C....all we could do was cry...it is that moving.
I was so sad to see my guy Jeff from CA had died.
Freedom is not free