I woke up this morning to the sight of humidity literally dripping from the windows.  The 13 year brood of cicadas in Tennessee are making outdoor activities less than pleasant.  Yes, it's summer in the south.  I am thrilled to be back after the long cold sojourn to South Dakota.  However, even I will admit that the summer weather in South Dakota is often better than the heat and humidity of middle Tennessee.
When I first heard the topic this week I thought S+J=C.  That stands for Summer plus JESUS equals CAMP.  I have a ton of camp stories that involve Jesus and a few that don't.  This topic has given me inspiration to write about some of these stories so head over to Sounds of Hope in the next few days and read some of them.  I'll tell you how I met Jesus on the island, met Jesus at Ashford Hills, met Jesus at Camp Challenge, the list goes on and on -  After all, Jesus ALWAYS shows up at church camp.  My favorite story of meeting Jesus at camp came as an adult at Harmony Hill Camp in Fulton Missouri.
Harmony Hill is a "holiness" camp.  My mother had married into a small denomination of people called the Church of God, HOLINESS.  Good folk, really good folk whose interpretation of holiness at the time included a long list of externals such as long hair for the women, no make-up, no jewelry, no mixed bathing (that means swimming with members of the opposite sex for you heathen :-), dresses only for the women complete with elbows covered, no TV, no movies, no alcohol, just clean livin' and Jesus. 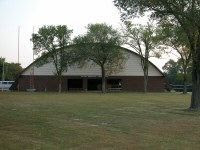 I sent my children to their kids camp a few times.  After kids camp, then came youth camp which meant camp meeting, under the "tabernacle."  These meetings were always attended by all ages.  I guess if you were young at heart, you could come to youth camp.  The tabernacle (pictured above) is a permanent take on a tent with no sides. Eventually cool breezes would pass through the building during the nightly gathering.  Mixed with the cool breezes was the stirring of the Holy Spirit.  While these good "holiness" folk weren't holy rollers and didn't approve of tongue talking, they did praise and pray loudly.  Under the shadow of the nuclear power plant down the road, the air was filled with the organ playing gospel music. 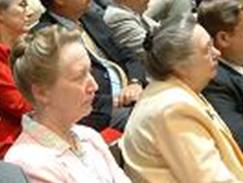 I took my seat with my step-sisters near the front.  I had gone to great lengths to appear holy.  I had scrubbed my face, covered my elbows, and took off all jewelry but a watch.  Watches were allowed because they were functional and not for adornment. My skirt and sleeves were long enough.  However, my hair wasn't.  I attempted to put it up in order to have it look longer.  There were a few heathen friends and backsliders who came to camp. I didn't want to appear as one of them.
The rousing music filled the hillside.  It was a beautiful night in early August in Missouri.  Humidity was giving way to the cool of the evening.  I'd come early enough to have a good meal in the mess hall complete with beautiful red tomatoes from someones garden.  The holiness women had cooked a good meal for all of us.  Smiles and friendly greetings abounded.  My step-sisters were well known.  I was welcomed as well.

As is usually the case at camp meetings, the Holy Spirit began to move.  As the sweat was dried by the paper fans with pictures of Jesus supplied by a local funeral home, you began to sense your mortality and the coming judgment.  I don't remember any preaching that night.  Usually a white male with a short haircut, his suit jacket over his starched white long sleeve white shirt and tie, sweating profusely he would preach the Word.  This was followed by a call for salvation, re-commitment, or sanctification.  The tabernacle was charged with the Holy Ghost that night.  The organ was pleading with sinners to come to the altar.  The preacher was weeping.  There was a lost soul there that might slip into eternity without Jesus.
I knew Jesus.  I had for years.  I might not have been holiness, but I did know Jesus.  I respectfully put my head down and prayed for this lost soul.  The tension and fervor of the praying climbed with every chord of the organ.  Heaven and hell were fighting over a soul.  These good folk were doing battle in prayer and would not leave until that one came to the altar for deliverance.
There was a tap on my covered elbow.  A woman stood in front of me.  Big tears streamed down her face.  She said to me "won't you come to the altar with me and find Jesus?"  I smiled and assured her that I knew Jesus.  She persisted, the organ persisted, by this time she had gotten the attention of the righteous.  All eyes were on her and I.  All prayers were directed toward me, the sinner, the outsider, the one whose hair was just not long enough.  I considered my options.  There weren't many. 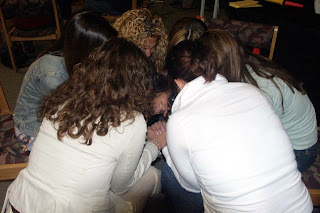 After another attempt to persuade this dear woman that I did know Jesus and was "saved," I went to the altar with her.  I figured why not?  None of the other options seemed good at the time.  As I knelt at the altar, the people shouted, the organ stopped pleading, I was their sinner that night.  Since I was at the altar, I thought I might as well pray.  I did tell God that while I knew I knew Jesus, if there was a reason for me to be here, He could do anything He wanted with me - no sense in wasting a good opportunity to recommit your life to the Lord.  Women gathered around, weeping and rejoicing over my lost soul being redeemed.
I am sure the people were glad that the service could conclude and they could go to their cabins for the night. The sinner had come home.  There was a new name written down in glory.  They had fought the good fight for my soul and had snatched it from hell.  Fortunately, I wasn't staying at camp so I drove home in my Volkswagen beetle wondering - wondering what that was all about...  I knew the good holiness folk would sleep good that night knowing their battle was not in vain.  I never went back to Harmony Hill.
Posted by Joyce Lighari

Resaved is like refried beans, what's the point? ;) I thought there might be some VBS stories lurking in this group. Me I just to the lake, water skied, and spend to o much time int he sun.

Oh Joyce you made me laugh with this one! I've (fortunately) never had such a public experience as yours, but have had a few times when bold people sharing gospel tracts didn't trust when I told them that I was grateful for the salvation that God had already given me through Jesus; seems that they wanted me to pray with them, just to be sure (only I was already sure)! Aren't we such weird-os as Christians sometimes?!

Tracy, I was just telling someone the other day that when people come door to door trying to get me saved I have to remember ALL the right phrases - no matter what I tell them, they just can't believe I'm really "saved." I think sometimes with our zeal some common sense and manners would be good - If you think about it, Jesus went about doing good and people came to Him... hmmm... might be a new way of evangelism

I love your stories Joyce! You are a master at stirring emotions with your words. This one made me laugh out loud!