You Must Be the Mrs.

I’ve seen a lot of people who you would consider famous. I’ve seen in person several presidents and even shook their hands. I was on Romper Room with Miss Jane as a child and later on Bozo the Clown. Owning a coffee shop near Nashville, I had some of the top singer/songwriters in the business come in and have me serve them. Probably I’ve had more brushes with the famous than the average person. 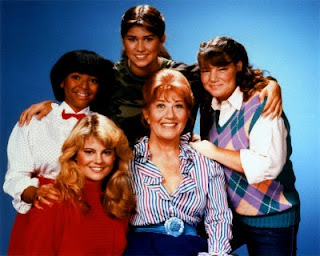 While working in a church office in Tennessee I took a phone call inviting the women's leader to a promotional luncheon with Lisa Whelchel, the former Blair Warner on the popular sitcom Facts of Life. We probably all remember the snootiness of Blair, Tootie on her roller blades, Natalie’s quips, Jo the girl with the street edge and the wisdom of Mrs. Garrett. It was a good show.
I went to the luncheon. Lisa was there to promote some Christian event for women. Most of the women were much younger than I was. Most were in that young mother category. My daughter has an interesting category for these type of women – she calls them Target people. The event was in Franklin, Tennessee so they may even have been a few shades above Target women, maybe Talbot women would be better. They were all sort of grown up Blair Warner's.
I was late so I sat at the only table in the back with a seat. Lisa got up with all the bubbly-ness of Blair. She asked if anyone could sing the Facts of Life intro song. I could but decided to not embarrass myself. While the book she was also promoting was probably very good, I really didn’t want it. It was the prize for successful singing of the Facts of Life intro song.  I was surprised, Lisa couldn’t sing it all either. I could have. I am not sure what that says about me.
Then she threw out an ice breaker for table talk. As if women ever need help in this department. I was already feeling a bit like the grandmother in the crowd so I wasn’t sure how much I wanted to break the ice. She asked us to think about which Biblical character we would want to be married to if we could be married to anyone in the Bible besides Jesus (ah, duh?). Then share it with our table.
There was the predictable conversation about Paul. He seemed rather hard on women, traveled a lot, ended up in prison and always seemed to be broke. Then David, ahh, the man after God’s own heart, right? Yes, but how many wives and concubines did he have? Then there is that messy story with Bathsheba.  If you wanted to have unlimited wealth, there is always Solomon. However, he too was not what you call a faithful husband.
The more the women shared, the less promising this exercise seemed; there were some pretty slim pickins to chose from the sacred scriptures.  As we went around the table each women settled in on an answer that was filled with adoring words about the character of their would-be Biblical husband. There were some laughs. There were some exclamations of “why didn’t I think of that!”
Finally, it was my turn. I had already thought of my answer. Never one for sameness or predictability, I had an answer that was very different from those making the rounds. I was sure I’d be the only person in the room who had my answer.
As the eyes of these young women turned to me, I said I wanted to be the wife of Lappidoth. I am sure you are having the same reaction as they did. Who? Who the heck is Lappidoth? What is a Lappidoth? Sounds like a breed of dogs. Oh no, that is a Labrador. They probably thought I still had my mouth filled with food and couldn’t speak clearly. Maybe I was already senile. Oh they smiled. They were polite. They were good little "Blair's." I just sat there soaking in the experience.
Then I said yes, I would want to be the wife of Lappidoth. He was married to Deborah, the woman from the book of Judges. I rather suspect than most of them had not heard of her nor had read anything other than the New Testament. 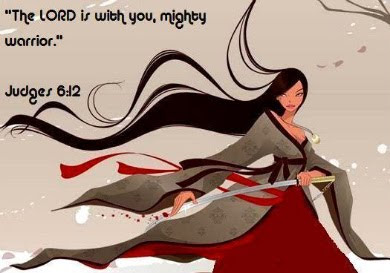 Deborah is one of two people in the scripture who were both a judge and a prophet. The other is the more well-known Samuel.  Deborah was also a warrior. Her buddy Barak (not the president) would not go into battle without her. She defeated the enemy sending their the enemy leader right into the hands of another strong woman, Jael.  If I had thought of his name, I would have said I wanted to be the wife of Heber the Kenite. Then I could have been the woman to slaughter the enemy in his sleep with a tent peg. You like action stories? This has it all. Read it in Judges 4-5.
I am not saying I have the attributes of Deborah. Definitely, I'm no Jael. I could never wield a tent peg like she did. The question was if you could be the wife of anyone in the scripture, who would you WANT to be? My answer was Deborah. Whose spouse would you want to be and why?
Posted by Joyce Lighari

I don't desire to be anyone's wife - but as noted in my blog yesterday, God thinks of me as a Jacob. It is scary how many similarities there are, and the prophet was right on.

Phillip had daughters that were prophetesses, I think I would like to have been like that; to come from a godly family and serve God and His church.

Okay, let's rephrase the question - whose spouse would you want to be?