What's for Dessert? - I Think it was Me 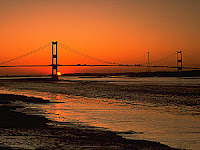 As I crossed the Thames River Bridge, the bright orange sun touched the horizon - and I heard that still small voice.

After five years of prosperity, good fortune and blessing, I made a few stupid moves in ministry. Due to my impetuous nature, inexperience, and lack of solid teaching, things started to crumble. My home had become a battle ground for the devil (literally - more on that HERE).

This week your Kingdom Bloggers are going to describe how they survived a desert experience. (Without dying!)

After nearly eight months of battling it out, I just needed some peace. In the summer of 1985, friends of mine from AA gave me the keys to a cottage on Cape Cod. I took a Friday off from work to enjoy a 3 day weekend in Orleans, MA; near the Cape Cod National Seashore.

I suppose a little history at this point might be helpful to frame my story. I had gotten sober in October of 1980 while attending music school. I started teaching music at a prestigious boarding school, solidified my relationship with Jesus and belonged to a spirit-filled church. The loving folks at Grace supported my efforts to minister to the youth in my denomination with both finances and prayer. I also had a part-time business doing carpentry on the weekends and during school vacations. I lived 300 yards from the beach. There were so many blessings, some days it was hard to count them all.

We all have times when things get really tough. It can be the loss of a job, financial woes, divorce, loss of a loved one, other relationship issues, sickness, or any combination of the above.

Having said that, my story is really no different than every other human on earth. We all have trials - count on it. The daily pressures, the emotional stress, and the strain of working 2 jobs, was just too much. After eight months of "trouble," I was ready to give up.

Driving my F-150 pick-up with the windows open, the warm July sun and the cool sea breeze greeted me as I crossed the Bourne Bridge. I found the cottage just off a dirt road on the edge of the inner beach. Tossing my suitcase on the bed, I grabbed my cut-offs, a pair of flip-flops and headed out to look for a bite to eat.

Each day, the sound of the ocean waves and the squawking of the sea gulls ministered to my thirsty soul. I enjoyed fresh seafood at just about every meal. I ate lobster at Kadee's. As I watched the fishing boats, I sipped cranberry juice at the Orleans Inn, and enjoyed oysters in Wellfleet. I napped, read the Bible, and did nothing every afternoon as I soaked up summer's best. At night I went to AA meetings and made a few acquaintances. Sunday morning I went to church. I even decided to take Monday off and went to another meeting at the Church of the Holy Spirit - had coffee with a few of the guys - one was a bass player in a local rock band. Quietly in my bed, I prayed - Lord, I just need your peace - I need your direction.

On my trip back to Connecticut, I received an answer - I heard it in the sunset.

The next weekend I decided to go to the Cape again - I still had the keys to the cottage. The weather was gorgeous - warm - with a gentle sea breeze. Certain I had heard God, I decided to make a deal with Him like Gideon. If I could get a job and an apartment, I would leave Connecticut and move to what I thought was paradise.

In front of the Lobster Claw Restaurant, I got a copy of the Oracle, a local newspaper. I looked over the ads and found a studio apartment that sounded perfect - a "God" find I thought. I called the number and no one answered, but I left a message saying I would call back later in the day. I decided to go to Nauset Beach and just enjoy the ocean, and pray. On the way, I saw a really beautiful house being built, and something "struck me" about the green and blue sign out front - so I pulled in. There were a couple of guys wrapping up their tools, and I asked if they were looking for help. "Yeah, but not until September 1st."

Wow, I thought, 5 weeks away. I talked with the foreman for a few minutes. Because I had my truck and all my tools, he hired me on the spot. We shook hands. I would start the Tuesday after Labor Day unless there was a glitch finding a place to live.

I called the folks with the little apartment, and it was perfect. Right in town, a walk to shops, restaurants, galleries, a movie theater, and not far from the development I would be working on - perfect. And best of all, as a resident, I would be allowed to drive my truck out on the outer beach and visit the North Atlantic, listen to the waves, watch the seals, and be at peace.

You might be thinking that all this was a blessing, but for me it was the start of 7 years in the desert. I couldn't find a church, the job I had so easily gotten, I lost just a few weeks after arriving. I didn't really have any friends save a handful of acquaintances from AA. Winter came.

Had I made a mistake? Wasn't that You I heard Lord? Didn't we make a deal - the job and the apartment? I began to doubt everything.

I often looked at the books in my bookshelf - bibles, commentaries, testimonies - they seemed almost foreign to me. Eventually I ended up with a pretty good job. One day all alone on a job site, the smell of fresh sawn 2x4s in the air, I decided to take off a cross that I had worn since confirmation. The heavens were silent.

Lost in the desert I abandon church, stopped praying, and stopped reading the Bible. I had an injury and I could no longer work in construction or play guitar, so I changed careers. I had a terrible car accident and suffered a serious depression. In spite of it all, I managed to finish art school.

Eventually, I started working at a photography studio. My new boss was after me to get back to church, and I did. My heart wasn't in it, but it was refreshing in some ways. Finally someone that I had witnessed to nearly 10 years earlier, got me to church, to an alive church.

After that first meeting, I remember reading this verse.

2 Timothy 1:6 For this reason I remind you to fan into flame the gift of God, which is in you through the laying on of my hands.

I was on fire - I was alive again. I also remember asking God why . . . and there was no answer. Years later I met a prophet from South Carolina at a church I had never attended. He said this as I stood before the altar in April 4, 1994:

"Hallelujah! Hallelujah! One thing about it, God is really working in your life. I see you wearing a cross, God wants to cross you out. If you will humble yourself to seek the Lord. As Jacob wrestled with the Lord, God is wrestling with you. He wants to bridle you so you can "gee-haw" with the Lord. Amen? The Bible says desire the ways of the Lord because his ways are higher then your ways. Hallelujah!

Brother I see you have been attacked by the Devil, and God has allowed him to afflict you like Job. And brother I never seen it so bad as it has happened to you. Look at you, you can’t even raise your hands.

As the waves have crashed into the sand and taken it away so has the Evil One taken from you. But the Lord Who commands the sun not to shine, and sets a seal upon the stars; Who alone stretches out the heavens, and tramples down the waves of the sea shall break the yoke, for His yoke is easy. Brother God’s hand is upon you. I have called you and set you apart. I have ransomed you and I will call you my own. Says the Lord."

Maybe prophecy is not your thing, but for me, that day, the Heavens opened. The Lord's amazing grace had pursued a wretch like me, and delivered my from the hands of Satan so that another chapter could begin. One that was far deeper then the previous one.

1 Peter 1:3 Praise be to the God and Father of our Lord Jesus Christ! In his great mercy he has given us new birth into a living hope through the resurrection of Jesus Christ from the dead, 4 and into an inheritance that can never perish, spoil or fade—kept in heaven for you, 5 who through faith are shielded by God's power until the coming of the salvation that is ready to be revealed in the last time. 6 In this you greatly rejoice, though now for a little while you may have had to suffer grief in all kinds of trials. 7 These have come so that your faith—of greater worth than gold, which perishes even though refined by fire—may be proved genuine and may result in praise, glory and honor when Jesus Christ is revealed.

The Lord does have wonderful plans for you. I am confident this was only the beginning.