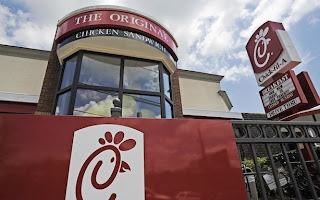 My friends know me well. Well enough to know that sitting on the sidelines during the whole Chik-Fil-A fiasco a few months back was just not going to happen.

Good Lord people...there's nothing in the Bible that even says Jesus ate chicken! Wait. That's wasn't the issue was it? No the issue was/is once again the Political Correctness Police playing Rodney King (RIP) with our First Amendment rights.

So, the owner of Chik-Fil-A doesn't support gay marriage. That's his opinion, he owns it (the restaurant and his opinion) and gay people need to get their panti...their shorts out of a wad and deal! He didn't say gay people couldn't eat or even work there. 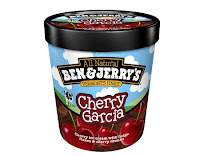 Hey. I sure as heck didn't stop eating Ben & Jerry's ice cream because they support gay marriage. As a matter of fact, I'm pretty sure Cherry Garcia is served in heaven. At least I'm hoping. Ben and Jerry have the right to believe what they want to believe, and that's a gift from God. Not just my favorite constitutional amendment.

Christians need to calm down though. Where's the love we're commanded to display in our actions and harness in our hearts when we're starting food fights with chicken sandwiches and waffle fries?

Gays were boycotting and Christians are lining up in the drive thru, and  I'm okay with that. Just please soften the rhetoric a bit. Gay folks believe they have a right. That's cool with me. Doesn't mean you do though, but you can sure have that opinion. Christians believe homosexuality is immoral. While I personally agree with that position, I caution my brothers and sisters who are quick to throw out  1 Corinthians 6:9-11 as the banner statement of our faith on the subject.

Not because the Word isn't truth and irrefutable, but because that passage has a number of sins that prevent a person from inheriting the Kingdom of God. Not just homosexuality.

Not to mention...do you really see Jesus in this picture? 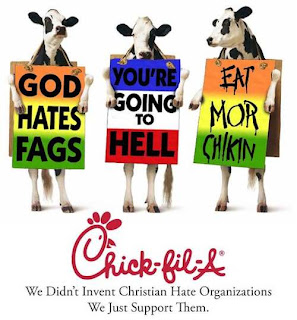 Ouch again. I'm really sorry many gay people will see their only true Savior in this light, and that's our fault Christians.

So, does Tony C going to Chik-Fil-A to show my support for those who oppose gay marriage? Absolutely not. I go because I support the God-given right of everyone to have an opinion of their own whether I agree with it or not. God will decide who's lived His way in the end. I just need to focus on Tony C, my own struggles to stay in His will, and being a beacon of His love.

Beacon. That word looks like bacon. Okay! Okay! And I really love that Spicy Chicken Club too...

You are hilarious, and right on...thank you for making me smile on a tough day....