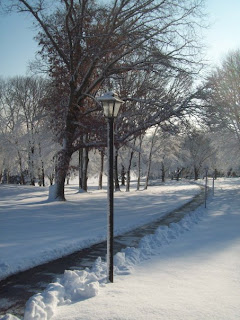 Your word is a lamp to my feet and a light for my path. Psalm 119:105.
When my son was 12, I forced him to read Sense and Sensibility. I can’t remember exactly why I did this--was it some kind of perverse punishment? Was I betting him that he would end up loving Jane Austen if he just gave her books a try? He being a compliant chap, he read it. I remember hearing the moans and groans as he read it, and was about to chide him for whining, when he said to me, “These women are driving me crazy!”
Ah, success! To a former English teacher, those words were music to my ears, because they meant he was responding to the characters and the plot, not just reading words on a page. We could then have a meaningful conversation about why the actions of Marianne and Eleanor drove my son to lunacy. Unfortunately, and not surprisingly, he never picked up Jane Austen again (except to bestow Pride and Prejudice and Zombies and Sense and Sensibility and Sea Monsters as recent gifts--revenge, perhaps?).
The Bible begs for response. It is the best and greatest story ever told. Its characters and plot plunge the reader into a hotbed of creation, love, betrayal, murder, intrigue, sex, sacrifice, prophecy, miracles, all the while unfolding God’s perfect plan to save this crazy planet of peoples through His Son Jesus Christ.
Growing up, I had this notion that the Old Testament (OT) was really old, and that the New Testament was really new, and that they were distinct from each other and unrelated. No one explained to me how fundamental the one was to the other until much later. In seminary, I took a class called, “The Messiah in the Old Testament.” I had always had a love for the Old Testament stories and writings, but this professor opened my eyes to how Jesus can be seen all the way back in Genesis, and throughout the OT.
Studying did not dry up my faith; it only deepened it, and also deepened my response to what I believe is the Word of God. I like group Bible studies--they are useful in not only building an understanding of the Bible, but also in building fellowship. But, I so appreciate having learned in seminary how to use all sorts of tools in my individual approach to studying God’s Word: commentaries, concordances, Logos software, online tools like Biblegateway.com and books on theology.
Sometimes I just crack open my Bible because I am thirsty and hungry: I need the “Living Water” (John 4:10; Rev. 7:17) and the “Bread of Life” (John 6:35) to fill my soul like comfort food. Sometimes when I am convicted or disheartened or confused, I study the Word to sharpen my mind like health food.
I think attitude can dictate response: my forcing Austen on an unwilling reader may have inspired a bad attitude (just give her--and me!--another chance, son!). If I believe I won’t find help or strength from God in reading His Word, I probably won’t. But, if I ask the Holy Spirit to help me as I read the Bible, He will! And He will help you, too (1 Cor. 2:14).
Posted by Kerry Luddy

Kerry...
I;m up for some Jane Austen discussion as well as cracking open the Bible with you.
Could you provide the Earl Grey Tea and some homemade scones?...(I thought so.)
I'll start heading up there right now. lol
Enjoyed your offering this week.
Linda

To this:
Studying did not dry up my faith; it only deepened it, and also deepened my response to what I believe is the Word of God. I like group Bible studies--they are useful in not only building an understanding of the Bible, but also in building fellowship. But, I so appreciate having learned in seminary how to use all sorts of tools in my individual approach to studying God’s Word: commentaries, concordances, Logos software, online tools like Biblegateway.com and books on theology.

I say a resounding Amen... when I decided to go back to school I just knew in my gut that there were resources and tools that I just didn't know about - now I do - and the list continues to grow... Yes, word studies are a hard discipline when done right but like anything that takes discipline, the results are abundant.