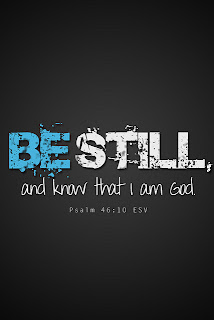 Picking a favorite Psalm was actually a difficult task for me. There are so many that I often refer back to given the situation I might be facing.

From the famous passage in Psalm 23 that I learned at a very early age to the plea for forgiveness in Psalm 51 that I so desperately needed later in my life, the inspired writings of David are among the greatest works of literature in all of human history.

When I stopped to meditate and ponder which passage I would write about today, my thoughts kept going back to the single verse in both the Old and New Testament that provide me with the most peace and joy I could ever imagine.

Be still, and know that I am God.

I literally got chills typing those all-powerful words. Everything else that ever was or ever will be falls under that declaration.

We often put ourselves in a position of far too much importance within the scale of the Almighty. Don't get me wrong. I'm eternally appreciative that the God of all things thought enough of me, or you, to come and bring His message of love right to us. To take on a burden of sin completely the opposite of His character so that I might have the privilege to live forever in His presence.  The concept is far beyond my feeble, limited mind...but I love Him so much...for caring so much. That just doesn't require a great deal of cerebral effort.

In the overall scope of things, people are but a tiny speck in the grandiose that is both the Alpha and Omega. While thousands of years seem daunting on our scale, that time is but a single blink of an eye to our Creator. Even that analogy doesn't come close to doing justice to the magnitude of eternity. Everything that is, was or ever will be exist within the scope of God.

What a comforting thought that God loves us so much He takes the time to show His love through His word and through His Spirit. He is God. I am so not worthy. He offers to be my refuge. My strength in any types of trouble.

How foolish to take such an offer lightly, or even worse, not at all...
Posted by Tony C

Wonderful! We so need the reminder in our frenzied world to "be still" and know that only He is God!

Tony...
I had been meditating on Isaiah 6:5 the other day...So I said: “Woe is me, for I am undone! Because I am a man of unclean lips, And I dwell in the midst of a people of unclean lips; For my eyes have seen the King, The LORD of hosts.”
Think that is kind of in line of what you are saying.
The magnitude of the Lord can undo us pretty quickly.
thanks for your thoughts
Linda

Amen! I am trying to be still more and more in His presence. Thank you for the post. Blessings.