'You really know how to make me laugh young man...'

I originally posted this piece in December 2009. After reading back over it several times this week, I knew reposting my words right after the passing of this very important man in my life was the right thing to do. To this day, I miss him...the way I remember him. I look so forward to our reunion on the side of Glory where he now resides. 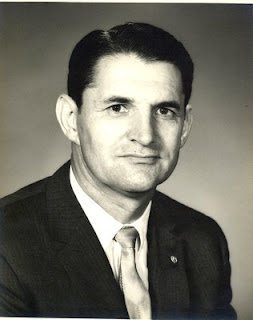 The Rev. R. Rye Fleenor, age 91, of Kingsport, TN passed away peacefully surrounded by his loving family and entered into rest with the Lord at 9:08 p.m. Thursday (October 22, 2009) at his residence following a brief illness.

Born in Sullivan County, TN on July 23, 1918, a son of the late J. B. and Mary Netherland Fleenor, he has resided in this area his entire life. Rye married Mildred Unavee Barker on June 18, 1940.


Composing this installment stirs a tremendous amount of diverse emotions in me. Sadness, joy, regret, shame, and heart-felt warmth. Time for reflection...cause for celebration...genuine appreciation.

Rye Fleenor, or always Preacher Fleenor to me, was not only a tremendous influence on my early spiritual walk , he lived a life that set a shining example for me to pattern. A loving, humble man that seemed to physically tower over most, Preacher Fleenor died 6 weeks ago...and I hadn't seen or talked to him in over 20 years. For that I'm both sad and regretful.

Being a teenager is tough business. Probably more so today than in my teenage years of the late 70's and early 80's...but I think being a teenager has probably always been a hassle. During those conflicted years for me, Preacher Fleenor was always a steady, calming vessel. He had a way of correcting and encouraging simultaneously I wish I could duplicate today.

I vividly remember his infectious laughter. He would listen to my cornball jokes, many I'm sure he had heard a hundred times again but would always laugh as if it were a Tony C original. I also remember the exact day he said the words that title this post...I was wearing a dress and acting like an unseen version of the Church Lady from SNL which wouldn't come along for another dozen years.

The man absolutely loved competition. During a brief exploration for me into the sport of boxing, he would light up as he gave me pointers and coached outside the ring. I think he was somewhat disappointed when I gave it up because he loved the purity of the sport...not necessarily the violence. As I stated in a previous post, he was at most every football or baseball game I played from around 1976 until I graduated high school in 1982. He was my most loyal fan, and I loved him like he was my own grandfather...who actually never came to any of my sporting events. 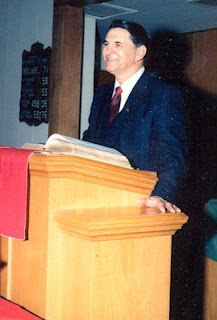 It bothers me profoundly to think about the disappointment I might have caused him during my dark years. I say might because I lost contact with Preacher Fleenor after 1984 which is totally my fault because I think I avoided him out of shame. In 1988, I was awarded a state honor in Hawaii for services during a natural disaster, and the story made local papers back home. I received a glowing note from him in the mail...but that was the final time we had contact. I remember reading that note and finding a quite corner out of the way to break down and sob at the pride he conveyed...and how disappointed he would be at how I had let me spiritual life stumble.

I was never close to another pastor until today, when I'm glad to say my current pastor is also my dear friend. He would like to have met Preacher Fleenor...I'm sure of that. Men like Rye Fleenor are rare and true gifts from God. I'm not saying perfect...just rare. My fellow Kingdom Blogger, Joyce, shared a phrase on Tuesday that I absolutely adored. Preacher Fleenor has been promoted to glory...and for that I celebrate and thank God for the time He gave me with him.

As I strive to be as much like Christ as humanly possible, I have a Father who walks with me and guides me through His Spirit. When it comes to being the best man I can be, Preacher Fleenor will always be an important role model in my life...no matter how old I am. I look forward to our reunion when my promotion finally comes.

Note: After posting this in December 2009,  I was contacted by Preacher Fleenor's great grandson, Andrew Glover, who had read the post. We are Facebook friends today, and Andrew actually preached a sermon from the very pulpit in the picture above just last year...as his great, grandparents smiled on him from Heaven I'm sure.
Posted by Tony C

This was a marvellous story of an amazing man. I'm certain the Father is enjoying his company in heaven.

Tony...
I can't know this for sure, but how you describe Preacher Fleenor, he probably would have been more forgiving, than disappointed in you.
I also don't have any reason, not to believe, that those who are part of the Cloud of Witnesses, "cheer" us on in ways unknown to us.
But with that aside, he sounds like a great man to have been a support in your life. Glad that you had him
Linda