It's not just a thrift store

This is a repeat but many of you weren't reading Kingdom Bloggers when I wrote this in 2009.  I have since learned that Girli Johnsen moved to California and has indeed gone home to be with the Lord.  Her influence is very strong in my life.

I knew the Captain of the local Salvation Army Corps. Like most everything we associated with in the neighborhood, she was Norwegian. My first memory of the leader of the local corps was walking with my father and coming across a street meeting in progress. Street meetings had a little music, a short sermon, an invitation to receive Christ right there or to the local church.

When I was five or six, I first met Captain Johnsen. It might have been Lieutenant Johnsen then but mostly I remember her as Captain. While we were not Salvationists, my father loved to go to different churches when there was a service in Norwegian. My father was an immigrant from Norway. So with my hand tightly in my father’s we walked the 3 ½ blocks to the SA Corps once afternoon. I was to become a Sunbeam.

Sunbeams are a scouting type program connected with the SA. I met Captain Johnson. She knew my dad and this was pre-arranged. She smiled at me and welcomed me with her strong Norwegian accent. I remembered her from the images of her in uniform, standing on the curb, Bible in hand, preaching. Captain Johnson was a single woman who was Pastor and leader of that Norwegian SA Corps in “Norwegian” Brooklyn NY. 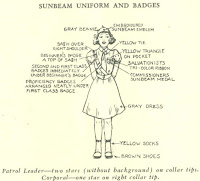 I got my drab grey Sunbeam uniform with the complementary beanie. Soon my sash was filled with badges for my mother to sew on my uniform. When I was seven, Captain took me to Manhattan with her. I do not recall how we got there, probably the subway. As every true New Yorker knows, you do not drive in Manhattan.

We walked into a big auditorium with a full brass band playing the songs of spiritual war. My uniform was freshly pressed and every badge straight. Soon an impressing SA officer announced that they were giving the Commissioners medal to me. He further explained that normally you had to be 8 years old to receive this medal but that I had completed all the requirements. They were making an exception for me. I walked to the front of the auditorium and saluted the officer. He returned the salute and pinned the metal on my uniform. I was the only Sunbeam from our Corps to receive this medal.

Captain took me to summer camp in the van, drove me back. She took me to rallies of various sorts. I went to VBS all through my childhood there and later was a helper. My reward for helping was a SA flag and American flag on a small stand. She took me to the officer training school. I wonder, did she see the call of God in me? Did she think I should be an officer? It was never spoken, but I think she did.

Later when I was old enough to be a Girl Guard (GG), the scouting program for older girls, I was asked at times to lead the meeting. Captain didn’t lead the Girl Guard’s. Kari, her young assistant, fresh from Norway, led it. She was amazing with the tambourine with streamers. She tried to teach me but I never excelled.

One GG meeting I decided we had become too “worldly.” I took it upon myself to preach a short sermon from John 3, Ye Must Be Born-Again. I must have been 11 years old. I even gave an invitation. At the end, Kari smiled at me and prayed. She thanked God for the reminder of God’s love for us. That was my first sermon.

I have so many wonderful memories of Captain (and later Major) Girly Johnson. I imagine she has been promoted to glory as they say in the Salvation Army. When asked what ever gave me the notion that a woman could serve in ministry I mention Captain Johnson.

Joyce...I am always so amazed at the myriad of experiences you had growing up in Brooklyn.
I can just picture you, as a child, just sponging up the attention and affirmation that you got. Great story
Lin

For the first time this year my wife and I took our turn at ringing the bell. What a blessing it was. And to reconnect with Captain Johnsen and find she is still ringing true is a treasure...but was she really --"in the bad row"? (see photo) ;-)

This has been one of my favourite weeks so far - reading about everyone's mentor.

I believe the Father is thrilled when we honour one another.