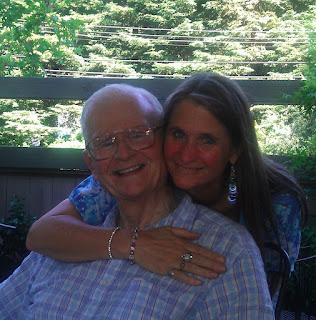 My father, Jim Vick, has positively influenced me in many ways. Like my father, I love music, dancing, singing, and laughter. Growing up, whenever my dad was home, he would have music on the radio or stereo or he’d pick up his guitar and play music. He liked to have fun and make us laugh with whatever jokes he’d heard, by telling a story, or by singing a silly song. Now I am like that too! I’m such a silly mom (The name Silliman fits!) that one of my son’s friends said to me, “You are more like a kid than a mom.” I took that as a compliment!

Dad likes to sing and whenever the mood strikes, he sings out with gusto. He sings all kinds of songs. Last summer we visited him in Northern California and I told him about some of the songs we sang at the nursing homes in our sing-a-longs on Wednesdays. As I knew would happen, we ended up having a sing-a-long right then and there. We sang, “Take me out to the ball game…” It didn’t matter that we were in a restaurant! Hahaha!

I like to think about how, as my dad’s firstborn child, I influenced him and “broke HIM in” to the world of babies, bottles, diaper-changing, and sleepless nights. Dad likes to tell the story of the first time he saw me. I was born at St. Joseph’s Hospital in San Francisco, four days after Valentine’s Day. Dad said, “They put you in my arms and you were all red and squallin’ and you had this big wrinkle of skin on your forehead. I thought to myself, ‘What have I done! I’ve created a monster!’”

We lived in San Carlos, about a half an hour south of San Francisco, and Dad commuted on the train to the city. He sold insurance bid bonds to contractors for a living for almost thirty years. Though he didn’t particularly enjoy selling, he did what he had to do make a living and provide for his family. That attitude of sacrificial giving of your life for your loved ones has been a shining Christ-like example to me my whole life. I was a “Daddy’s Girl” and sought to please him every chance I got. This has served me well in life because now I’m my Heavenly Father’s “Daddy’s Girl.” I delight in His Presence and seek to please Him.

After school I waited on the sidewalk for Daddy to walk home from the train station. I roller skated, played with my Barbie doll, or bounced my red, rubber ball to pass the time till Daddy got home. Many was the day I didn’t see my father because he left for work before I woke up and he worked late and didn’t get home till after I went to bed. When I spotted him I squealed with glee, ran to him with open arms for a hug, and put my little hand into his big one to walk him home. I loved to see his monthly train ticket—a long strip of paper with multi-colored squares and little holes punched on the dates. At the end of the month I was thrilled when he gave me his expired ticket. I collected them in a scrap book and still have them to this day.

Some of my earliest memories of dancing were rocking out with Dad in our living room to music on the radio. When I was little, my dad would pick me up and spin me around. Maybe that’s why I like twirling around so much when I dance! He now watches old movies of musicals and dance performances more than he dances himself. He’s 80 years old now and doesn’t boogie as much as he used to. However, on a recent visit we all went out to eat and there was some rhythm and blues playing and I noticed he enjoyed a little dancing down the hallway on the way to the men’s room.

Whenever there is a teachable moment, my dad takes the opportunity to give a lesson. I still think of him when I fold a letter into three equal parts, when I tie my shoes, or when I introduce myself to someone and make a point to say upon leaving, “Nice to meet you!”

I learned to love the ocean from my dad. Some of our happiest memories were Saturdays spent at the Pacific Ocean beaches near San Francisco. There is something so refreshing and invigorating about breathing in the salt sea air, listening to the roar, feeling the wind in your hair, and watching wave after wave crash and smoothly slide out onto the sand. I also love rock hunting along the shore like my father. I never get tired of picking up a rock that catches my attention and marveling over the beauty of it. Rocks rock! I learned that from my dad.

My father is a very positive man. He taught me to try to always say something nice about people. He told me you can always compliment a person’s smile. My father is very charming and in his day you would describe him as tall, dark, and handsome. Though he is stooped over and white haired now, I see him through love-filled eyes as one of the most good-lookin’ men you’d ever meet. I love you, Daddy!

Jenna...
What an uplifting, honoring and melodic post.
The picture of you and your dad, says it all.
What an incredible gift you have been given, to have your dad as your father.
I can see where the concept of a loving and accepting ABBA, would not be hard for you to imagine and take in.
What you wrote, just made me very happy( albeit the circumstance with your mom)
I could understand how your dad infused you with such a bubbly personality
The sing-a-long sounded great.I too have volunteered in Nursing Homes, as well
Thanks Jenna
Linda