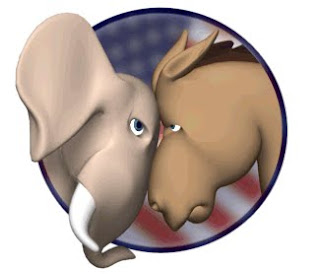 But as God has distributed to each one, as the Lord has called each one, so let him walk. And so I ordain in all the churches. Was anyone called while a Democrat? Let him not become a Republican. Was anyone called while Republican? Let him not be Democrat.   Democrats are nothing and Republicans are nothing, but keeping the commandments of God is what matters.  1 Corinthians 7:17-19(Kinda)

Jesus ain't a Democrat and He ain't a Republican.
He is the Son of God!
His Kingdom is greater than the United States.
He is the King of Kings!
Jesus answered, “My kingdom is not of this world. If My kingdom were of this world, My servants would fight, so that I should not be delivered to the Jews; but now My kingdom is not from here.”
John 18:36
Then comes the end, when He delivers the kingdom to God the Father,
when He puts an end to all rule and all authority and power.
1 Corinthians 15:24
The Lord said to my Lord,
“Sit in the place of honor at my right hand until I humble your enemies,
making them a footstool under your feet.”
Psalm 110:1
Posted by TeVeT