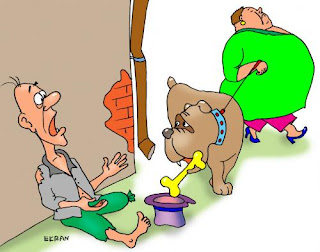 If someone has enough money to live well and sees a brother or sister in need but shows no compassion—how can God’s love be in that person?
1 John 3.17
I know of a couple of Bruthas that were asked by their church to help a single mom move a bed and some furniture.  It turned out that the church secretary had come someone wanting to get rid of these items.  The one dude was pretty jacked up because he had preached for years about how the body is supposed to step up and help out those in need.

That enthusiasm quickly turned to frustration and anger when he realized the  peeps giving away the bed and chairs was the County Landfill.  Not a member from the church or even another church, but items that were intended to be buried under all the trash.

The two dudes moved things in and set up each piece in different locations as the mom and her friend suggested. It seems that no matter what condition the furniture and how empty a room is, it is difficult for two woman to decide where items needed to be placed. The single mom was excited that she would finally not have to sleep on the floor.  She was thrilled that her apartment now had 'adult' furniture other than the kitchen table and chairs.

Anyways, the one Brutha who was pissed at the shallowness of the church, took it upon himself to give the single mom some cash so she could go out and buy some sheets, pillows and Lysol.  He requested that the mom didn't tell anyone about the amount or who gave it to her as he referenced James 2.15-16.  He did this in front of the younger Brutha deliberately, so he could show Faith in action. He did all this hoping to sow seeds of compassion and good works.


So you see, faith by itself isn’t enough. Unless it produces good deeds, it is dead and useless.
James 2.17
Posted by TeVeT

It is amazing how church is always me first.

I just overheard someone talking about the alcohol tax law at lunch. She was deciding how to vote, should I vote for a candidate that will repeal the alcohol tax, or the one that will spend it on entitlement programs.

I think you're right. If our faith is real, part of the evidence in our life is holding our possessions/money in an open hand; having a willing attitude to give.

Uh, there is an overlooked problem here. Bedding left at a landfill is not healthy. Often it can be infested with bedbugs and people don't even realize it until it is too late.
Please, please tell this woman to buy zippered, only zippered plastic covers for her mattresses. Top and bottom mattress.
Bedbugs are horrible to have and it has spread throughout the country.
Yes, I do think it is deplorable that this woman had to take things that were put at a landfill.
It was nice of that Christian man to help out the woman financially,