It's NEVER too late

I’ve written a lot about my life journey.  I’ve shared the pain of being a single mother with no education.  I’ve shared that I was abused and abandoned.  I’ve shared that feeding and clothing my children meant food stamps, commodity foods, welfare food baskets and miraculous deliveries of food.  It was not easy.  It was something that if you met me now, you’d probably never believe.  You see now a confident woman who is working on her doctorate and you probably think I never had it rough.  You would be wrong.
It was May 10th.  It was graduation day at the University of Missouri-Columbia.  I was alone in a delivery room (this was before they babies born in hospitals came into the world in a birthing room).  I was delivering baby number 3.  The baby would be Joshua if a boy and Bethany if a girl.  I was praying for a girl.  I had two boys I loved but in my mind, this was my last child.  This was my only hope for a daughter.
I had struggled all night thinking my pain was just the bladder infection the doctor had diagnosed earlier that day.  Around 2 a.m. I knew different.  I was staying with some friends from church who kindly let me spend the night there since I was not well.  My boys were at their aunt’s house.  The woman was a powerhouse Christian and prayed in the spirit all the way to the hospital, literally dodging black cats with her large white Cadillac.  Two hours later, there was an emergency.  The baby had aspirated before birth and in haste, the doctor pulled her out with forceps.  I saw flesh being moved from my body to the waiting pediatricians.  I asked was that my baby.  The doctor said yes.  I said what is it?  He said a girl.  Then he moved closer to my face and said, Joyce, it doesn’t look good.  Don’t get too excited.
I didn’t see her again until I was able to walk to the NICU.  I had already been up in my room.  It was a large ugly cavernous room.  They put me in it because they feared I’d be mourning the death of my daughter.  They didn’t want me with a woman who was cuddling her baby.  With my IV pole, I walked to the sink.  With my untethered hand, I started washing my hair in the sink.  That did make the staff rather upset with me.  I guess I was supposed to stay in bed and not worry about my hair.  Then I walked to the large window on the other side of the room.
It was a beautiful spring day for Commencement at the University of Missouri.  The Hearns Building was abuzz with cars, and people.   Streaming out of the building were young scholars.  People my age, my peers, streaming out of that building with their caps and gowns.  I cried.  I thought that should be me.  I should be graduating college.  Instead, I have three beautiful children who depend on me and I am a welfare single mom.
I give all the glory to God for where I am.  I really do.  But I also believe in education.  It has been one of the tools that God has used to shape me.  It has not only shaped me but transformed me.  While on the inside, I’m still rather quite insecure, education has given me a sense of confidence.  I can appear as if I am ready to take on the world.  And you know what?  I probably could and do a great job with it.  And it is first because of grace and second because of education. 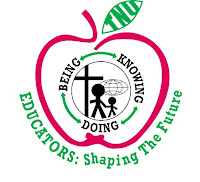 Trevecca's College of Education Logo
I didn’t care for school as a kid.  In fact, in Jr. Hi, I pretended to be sick most of the time.  In 9th grace, I would be sick on Monday, Tuesday, Wednesday, Thursday, and Friday morning – I’d return to school on Friday afternoon to work in the library ONLY so I could go out over the weekend.  I dropped out after the 11th grade to marry and became a mom before I would have received my diploma.
Now, I have a passion for education.  It is so important.  I can’t say it’s about the job either.  I’ve had some very good jobs.  I’ve been somebody career wise.  And yes, I wouldn’t have been without education.  But it’s not about the job.  It’s about knowing. It’s about learning.  It’s about the transformation of a welfare mom to a doctorate.  I’m too old for this doctorate and I know it.  Everything says it was too late.  But then again, when I was young and cried as my peers graduated, everything said it was too late to go back to school.  I did it then.  I can do it now.
What about you?  What has education done for you?
Posted by Joyce Lighari

Thanks Joyce for reminding me that God does wonderful things in each one of us.

Where education defines who you are [Joyce], it was an idol for me. I have 9 years of college - and I would still be going if the Lord had not spoken to me about it; even recently.

What I love about Jesus is that he is in relationship with us; we walk out our destiny in a personal way. In the same way that not all are pastors in the church, not all are destined for higher education. The joy is in following him.

My college education has had little to do with my success as a software engineer. The 6 months I spent at a tech-school on Saturdays, and a 10 week class I attended in the 90's has much more to do with my career than all the college credits I have.

Even Bible school, has had little impact on how I operate in my gifting within the church.

My point is this: our destinies as Christians are different, and the paradox is that what works for one, is not a formula for another.

I am grateful there are dedicated and compassionate teachers out there - I am just not one of them. It is the same for pastors and evangelists - they are what I am not. I am glad there are all types of folks in the body of Christ. My favorite ones are those that God is anointing to do great things for the Kingdom. You are one of them, Joyce.

Thanks David. I was thinking about you when I wrote this because I knew we were different in this area.. but that's what was on my heart today and YES, it is good we are different. What is best to operate and develop the gifts God has given you. You do that... and with you, we are complete. I can't function in my gifts without you.

I adore reading how God has worked in your life Joyce. What a great and awesome God we have! Who can fathom His ways?!

You guys are both so right on too that His plans are different for each of us. It sure makes for an interesting life