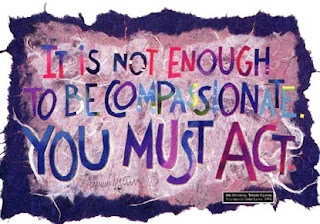 I like to think I am a really compassionate person.  When I think though of say a Mother Teresa, I realize I’m probably not that compassionate after all.  Compassion involves something much more personal, much more self-sacrificing than just feeling sorry for someone or giving them your spare change, food that you don’t want in a food drive or saying a prayer for a sick person.
Compassion implies action.  A few years ago as I was pastoring a church in Tennessee I wanted to be known as a church that was compassionate.  We had gotten almost by mistake some stuff about ARK – Acts of Random Kindness.  It had some connection to the movie Evan Almighty with Steve Carrell.  This ARK campaign wanted to help promote the movie as well as promoting acts of kindness.  I liked that.  I prayed about what we could do as a church.
Our church met in the coffee shop I owned.  We did breakfasts, full breakfast, excellent breakfasts at really reasonable prices.  The business never did that well.  We underpriced ourselves and were in a relatively rural community that preferred greasy meat and three food.  (For those of you not from the South, a meat and three is a restaurant dive that serves you the meat of the day with three veggies, like overcooked carrots, greens, okra, mushy squash, and the like.)  The church would come in on Sunday morning and often my few parishioners decided they were hungry too.  I tried to keep them from the muffins and such but I never succeeded.  I tried to avoid making coffee drinks besides regular coffee.  Again, I had little luck.  After all, why meet in a coffee shop if you aren’t going to eat too. 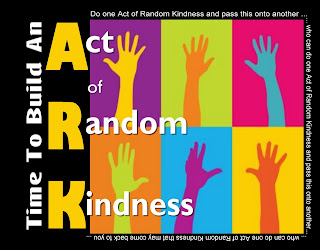 Then it hit me.  Why not offer free breakfasts on Sunday.  I thought okay, our church folk were already eating food free but how did we find “poor” people to feed.  Then it hit me.  The Bible only says to feed the hungry.  It doesn’t say only feed poor hungry, it just said, feed the hungry.  So up went the signs.
Free Breakfast on Sunday
God invites you to Free Breakfast on Sunday
Join me for Free Breakfast on Sunday – God
We had banners and signs.  We put it on Craig’s list.  I insisted that we were not going to make this a bait and switch either.  People were free to eat on Sunday and then go canoeing on the river or to their own house of worship.  If they wanted to stay with us for church – that was great.  We didn’t attract multitudes for that either but one day a man on a bike pulled up for breakfast.
He looked out of place in this small semi-rural town.  He came in and said, I saw the sign.  I said have a seat.  One of the men started talking to him.  I started two large Belgium waffles for him.  I gave him some OJ.  He ate as if he hadn’t seen food in a long time.
He told us his unbelievable story.  I did believe him, even though it was unbelievable.  He was riding a bike from Nashville to Little Rock.  He had slept in the bathroom in the park until a trooper found him and told him to leave.  We packed a sandwich for him, gave him some fruit, chips and water.  We prayed for him.  He cried.  He said he’d known the Lord but his light had been hard.  Some of the people tried to get him to stay for the service.  I said no.  I said it’s a long way from Pegram TN to Little Rock.  He probably should start peddling that bike.
I know this story is a far cry from a story of real compassion.  However, I think it was one time that I was moved with compassion.  It was a time when I was moved to action.  Not some spiritual hype type action, but concern for a fellow human being who needed food and to be blessed.  We gave what we could.  I have no idea what ever become of him.  I don’t know if he made it to Little Rock.  And yes, I am a skeptic at times, so I don’t know what part of his story was true and what wasn’t.  I do know he was hungry and I gave him food.
Posted by Joyce Lighari

Thanks for the warm smile this morning.

I disagree - I think this story IS a story of compassion. Compassion comes in all manners but it always is love in action just like you're talking about here.

Serving others in God's grace. What a compassionate story.