Back to school again.

As I was reading David's blog yesterday and thinking about my own, I thought, wow - God really likes to mixes us up, doesn't He? He certainly doesn't deal with all His children alike - I guess there is no cookie cutter mold for Christians, is there? 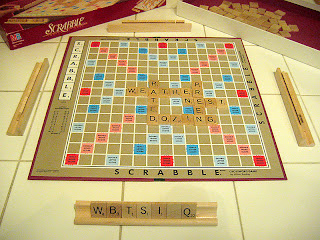 Like David, I played a lot of Scrabble with my mother. I remember sitting on the floor, her on the tangerine sectional couch with the plastic slipcovers - I kid you not, we really had those - she had this rounded end triangular coffee table too. That couch and her coffee table were her pride and joy. I think it was the only new furniture she ever had in her life. Almost every evening I would get the brown Scrabble box, turn the letters over on the box lid and we'd play Scrabble. She was good at it, soon I got better than her at it. It was a big moment in my life to routinely beat (legitimately too) my mother at Scrabble. I still love the game.
However, unlike David, my mother was a high school dropout. She had finished the 10th grade and quit school. She never had a job other than a few jobs doing domestic work. My father had little formal education as well. He worked as a janitor at a large bank in Manhattan. Every night, while we were playing Scrabble, my father was getting his last little bit of sleep. As we were folding the Scrabble board, he'd be getting up. He'd have a bit of coffee and a snack. He'd leave to board the subway to clean the floors and toilets at the bank. When I was asked in school, where does your father work? I would say he is a banker. It was an honest answer from me. I didn't know any better. My father worked at a bank. That made him a banker, right?
I too quit school. Education was important in our family. Both my brothers had managed to go to college. The one had even been a high school drop out, like me. But it was different for me. I married young. I had three small children. I had been beaten and abused. I was pretty much a loser by all standards except God's. God some how or other reached inside of me and gave me the courage to go back to school. You can read a bit about it here. The story of that journey starts here. 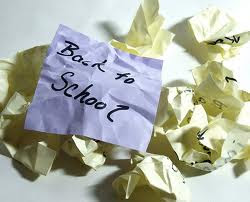 I have wondered how I really felt that first day on the University of Missouri campus. I had an infant at a day care a few blocks away. I would go in between classes and nurse her. I had two boys elsewhere. One was in Head Start learning his A, B, C's. The other was in grade school. Driving to class in a 69 Volkswagen bug, running to feed children macaroni and cheese and hot dogs or whatever was in the pantry, it was certainly not your average back-to-school experience. Unlike my walk to PS 94 to start Kindergarten, I didn't have my mother's hand to hold to help me feel brave.
I got through it. I got a degree. I was married again to my husband of now 32 years. I was pregnant with our first child. But I had done it. God had taken that spark in that hospital room at the pit of my despair. Took a young woman who everyone labeled a loser and helped her get a degree in 3 1/2 years with 3 children.
Children, husband's degree, more children and bills kept me from pursuing any more degrees until a few years ago. I went back to school again and now I have a Master's degree. That degree actually took me more years than the Bachelors did, but I did it. Now I am in school for a doctoral degree. I'll do that in three years. I have no choice, that's the way the program works.
God had a different path for me. One that seemed impossible. But that's sort of how God works. He loves enabling us to do the impossible.
Posted by Joyce Lighari

As I read this post I thought about how I'm sure glad that God never looks at us as losers. Especially since there's been times in my life that I would sure have qualified as one by the common cultural standards. I'm also thinking that I agree with you that it's interesting how God works so differently in each of our lives; Christianity is definitely not routine or boring!

Thanks, Joyce. Of course I thought of you working on your doctorate, and God telling me I didn't need one.

The will of God is as individual as we are. Life is tough enough with the right decisions. Without hearing his voice, I don't know how people do it.

Your story is the genre that inspires me the most Joyce. You made opportunity where it seemed opportunity didn't exist.

"Can't" should never be debilitating word...and you serve as a role model in that regards.