LISTEN, FOR I HAVE WORTHY THINGS TO SAY

My title is taken from Proverbs 8:6a. This would have to be the intention of anyone who writes. The reader reserves the right to disagree but putting wings on words is the thrill of writing.

It was a mystery, probably an idea that was spurred on by the popular Nancy Drew Series. What I distinctly remember was the passion of crafting scenarios that would bring me into made up places. The characters reverberated with memorable roles. I was the main character who was definitely a heroine. She was wise beyond her years and an accomplished sleuth. And she was clever and likable.

From as long as I can remember, I loved writing as much as I loved reading. That fact remains today.

The three times that I attended Writer’s Conferences, along with a Writing Course, were times that I learned invaluable information about writing.

I remember walking into the Writing Class late. The Teacher had already asked the students a question. He wanted me to answer it as well. While walking to my seat, he asked “What was the last thing that you read?” I swear I was not trying to be funny, but I just took the question literally and said “A yogurt container”

I mean, I had just started Weight Watchers and you can understand how food takes the forefront when you start a diet. Nevertheless , the teacher and the class found it pretty funny.

I also remember from the class, the teacher holding up a freezer baggie, filled with a pile of papers. He explained that they were rejection slips that he had received over the years. He had sent a good amount of book proposals to publishers before his books were accepted. He did it so that we would realize that it is a real part of the book proposal process.

I heard that same information at the Writer’s Conferences as well. I have even read that the book The Help, that was on the New York Time’s Best Seller list for many weeks, was rejected a fair amount of times, before being accepted.

I have written and had published some magazine articles. It was kind of thrilling to see my name in print and to have “what I had to say” of value to the people who made the decision to print them.

One is a Children’s Book about a little girl Walrus named Cindi and her friends. It is not a Christian Book per se, but one that portrays good morals.

The idea for the book came to me when I was reflecting on a group people that the Lord had put in my life, when I was in a dark and depressing period. Some of these people, who supported me , were professionals and others were friends. As a tribute to each of them, I have used either their name or a portion of their name for my characters.

Whether my book is accepted by a Publisher or not, I have purposed that I am going to, at the very least, have some printed and distribute them to these special people.  I would think it would be a blessing for them to see that I accomplished some things that I dreamed of.

One thing I learned about children’s books is that if the author doesn’t do the art…the publisher will likely pick the illustrator.. I think that could be a little tricky, as I surmise that the author might feel somewhat guarded about their story. I have often wondered how the author would feel if they truly disliked the art.

The second book, I would say is in the category of Inspirational Christian Women’s Issues.

The title would be “You Can Know a Lot about a Woman by What She Carries in Her Purse”. 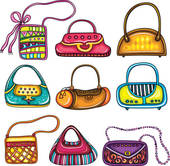 The idea first came to me, as a line in the eulogy, that I wrote for my mom. My mom always carried a large purse. I talked about the contents of her purse as a way to tell her story and to let others know more about her.

In addition, I recently did a display for our local library. It had various purses ,along with the contents visible and spilling over near each purse.

There are 4 Christian Women Book Authors that I follow on the Internet, on their Websites. It has helped me to see that they are real, down to earth people and I have gleaned encouragement and ideas from them.

They are Karen Kingsbury, Angela Hunt, Ann Tatlock and Mary Demuth. I have contacted them personally with comments and or questions and all have responded. I realized that authors do like to hear feedback and I found them willing to help.

Mary Demuth is very generous in offering her expertise and encouragement for writers. She is an Author, Speaker and Book Mentor.

With mentioning these authors, I would encourage anyone to contact their favorite authors. When you think of it yourself, wouldn’t it feel great to get positive feedback or questions about your writing?

At the very least, you would know that there is someone:”out there” reading what you wrote.

Don’t lose heart if you are rejected a few times.

Mary DeMuth is a wonderful writer--I found her memoir at a Christian book shop in Branson, MO, and read it on the plane trip home. Great idea, Linda, to write to the writers!