I'm From Missouri - Show ME

I think I’d like to just say ditto to David’s blog yesterday and move on. So much of what he said pertains to me as well. While I didn’t fail English and I have at times fancied myself to be a writer, I too doubted when I hear over and over and over again, you need to write a book. I don’t know if doubt is the right word to describe my feelings it is more that I think I am just giving into my own fantasy and wishes. Yet, how could all these people who know little about me say the same thing? 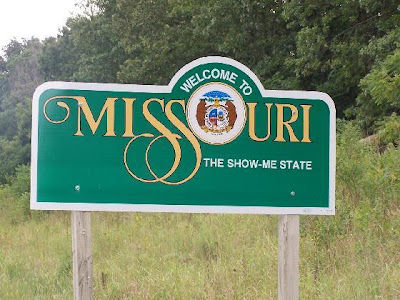 I also thought of Thomas as soon as I heard the topic for this week. Doubting Thomas – I preached on him just a few weeks ago. I agree, Thomas had a lot more faith than I do too.
As I looked at the passage where we proclaim Thomas a doubter, I saw something rather different than I had seen before. We focus so much on Thomas and his doubt that we forget about the other people in this story. Like Thomas, they had been with Jesus. They saw all the miracles Jesus did. But what were they doing?

Later on that day, the disciples had gathered together, but, fearful of the Jews, had locked all the doors in the house. Jesus entered, stood among them, and said, "Peace to you." Then he showed them his hands and side.

Locked inside…
That doesn’t really sound like men and women of faith and power to me. It is clear. They were scared. I think terrified might be a better word. Their Teacher, the one they had banked their lives and livelihood on had just been murdered.
Notice that Jesus showed them his hand and side. He spoke Peace to them. Many of us are doubters like the disciples. We hid behind closed doors never admitting our fear or doubts. We’d prefer to look like people of faith and power – we make good confessions and say hallelujah and amen! But in reality, we are locked behind this façade of superficial faith. We know all the right words.
I’ve been a lot like that at times. I’ve prayed for people with some pretty serious illnesses and situations. I pray for them that they will be healed, or their finances restored, etc. Yet, when it comes to me, my needs, my problems, my issues, I seriously doubt. Not that I doubt what God can do, I just doubt He’d do it for me. I lock myself up inside and hide just like the disciples.
All the disciples had doubts – fear and doubt go together like peas in a pod. They have this symbiotic relationship and feed on each other.
Thomas on the other hand was not behind the locked door. I wonder what he was doing? Do you ever read the scriptures and wonder such questions? I do. Had he returned to his former life? Was he the one who had the most courage to go shop for the trembling disciples? I don’t know. But he wasn’t locked up behind a door.  It seems he wasn’t as bound up in fear.
I guess Thomas was a Missourian – Missouri is the show me state. Their motto: I’m from Missouri and you gotta show me. I’ve lived in Missouri. I’m a bit like that myself. You want real. You want to know for yourself. You want to experience it yourself. 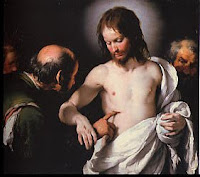 Eight days later when Thomas was with them, it doesn’t say the door was locked. Seems that encounter with the Holy Spirit took away the fear. It’s much easier to not doubt once you’ve had an encounter for yourself.
Thomas was honest about his doubts. The only way to have your doubts resolved is to be honest. To stop hiding behind the closed doors of fear. I think Thomas was a realist. He wanted to know that this was real. He wanted to know it for himself. He said SHOW ME.
Sometimes, our doubts are just the opportunity Jesus is waiting for to show you just how real He is.


What are you doubting? If you’re hiding behind a door of fear, don't be surprised if Jesus pops in your life and says PEACE. If you’re like Thomas and you want to be sure it’s real. Say so…

My God is real, how about yours?
Posted by Joyce Lighari

INSIDE THE SHRINK said...

Oh how I identify with you on this one. After years of people telling me I need to write, I can finally hear the still small voice within me saying, "I want you to write for Me." After making all the excuses I can muster, I am now faced with the truth. I must write. I have to write. I cannot not write. No more doubt about that. I'm just waiting to see how the Lord is going to work this out. The writing business is brutal and complex. But my God is bigger. Praise the Lord.

Such an inspiring message about our Lord. God's blessing too you. Lloyd

Really enjoyed this music video, and it fits perfectly with the topic of doubt. What an injection of faith!

I relate, and think many people do, to your comments regarding how you believe that God can do things and you pray for healing/restoration/finances/etc. in full belief for others, but sometimes doubt He'd want to do it for you. I think the enemy uses this lie on a lot of us because on some level we still buy into that thought that it's about us, instead of the truth that it's all about Him.

It's exciting to read about what God's doing in your life and I look forward to hearing more about the upcoming book.

I think you should just write the darn book - especially cuz yer English is so good.! :O)

If you think about it about the only thing all denominations can agree on is that God is real.

For many years I was a doubter and concluded that all things can be explained scientifically. How ever, that only brought more doubt into my thinking.

It was only when I surrendered that all the answers were in the Bible if I would only believe as I read it that many doubts were revealed to me to be fact.

Hi Joyce!
It's mouthpiece from Missouri!
This is my first time blogging!
As you know, I am in the process of putting together the pieces of the puzzle of my life. I didn't have the picture on the puzzle box for years, but I feel that now is the time...to step up and Proclaim that God is all that matters anymore!
Joyce and I have been lifetime friends of over 40 years! Many of life's ups and downs have been shared...but, now is the time to stand on what we have said we believe in!
If I fall on my face, then I know Jesus will pick me up, and tell me what I have tripped over!
I love you Joyce! I love all God's people!

I'd love to hear you preach that sermon Joyce...and read that book.