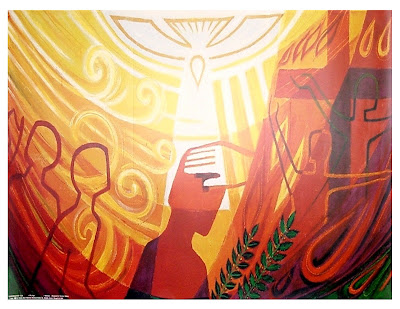 I had been a Christian for several years when I first heard about becoming “Spirit-filled” and “speaking in tongues”. A friend in college, Glen, who I met at an Inter-varsity Campus Fellowship Meeting, whispered to me, “There’s more!” Glen invited me to a meeting at a Pentecostal Church in San Jose, California. I remember two things, people singing in tongues and the altar call. At the conclusion of the meeting people lined up for prayer and the laying on of hands. One after another people went down—straight backwards! Glen encouraged me to go forward. A skeptic, I replied, “I will NOT go down.” He said, “Oh yes, you will--the Holy Spirit is strong!” Determined to stay on my feet, I went forward for prayer. Sure enough, I went down. I was “slain in the Spirit” against my will. I don’t even remember doing it. Bewildered I sat up and grinned sheepishly at Glen. On the drive home He gave me another challenge—to read Acts and all the verses in the New Testament on the Holy Spirit. Each day I read in my Bible a little more about the Person of the trinity I knew the least about.

My friend Linda and her husband also shared with me they had discovered, “There’s more.” She had a special sparkle about her that was new and she was especially full of joy when she told me how she had gotten a prayer for “the Baptism of the Holy Spirit” and how she and her husband prayed in tongues and how beautiful it was to pray in this spiritual, angelic, heavenly language. She astonished me by letting me know she’d been praying for me that I’d receive the gift too. They led worship with guitar and singing at Peninsula Bible Church in Palo Alto at their Sunday night Body Life Meeting where many Stanford College students attended. They were asked to leave the worship team because they did not believe in speaking in tongues. She told me they were actually glad because they were free to start helping lead “Spirit-filled worship” at another church.

The summer of 1978 I had completed two years of Canada Community College. I moved into The Birch House in Redwood City owned by a minister who rented out rooms to Christians. I rented the upstairs bedroom for $100 a month and commuted to San Francisco on the train for a clerk-typist job in an insurance company. The train station was two blocks from The Birch House, so that was convenient. As soon as I met Debbie, who rented the room across the hall from mine, she got out her guitar and began to sing a song she wrote and she said “The Holy Spirit fills me as I lead others in worship.” She invited me to a coffee house where Christians fellowshipped called “The Way Inn” where she led a singing and worship time. She introduced me to three guys that looked like hippies and had recently taken over the ministry of “The Way Inn.” (One of whom, would become my husband, Cliff Silliman.)  Debbie said, “They are Spirit-filled-speaking-in-tongues-Jesus-people too.” She said it like it was a normal part of following Jesus in a Christian’s life. They made me want more of the Holy Spirit too.

My younger brother was into using drugs and got into trouble shop-lifting and using drugs. He was put into juvenile hall. We did some family counseling and I remember praying for him a lot during that year I lived at The Birch House. One morning I remained kneeling by my bed after I had finished praying for my brother. I still had such a burden on my heart, but I didn’t have any more words that I hadn’t already prayed. I said to God, “If praying in tongues would help, I would like to receive this gift.”

On a Sunday night a few weeks later, in October 1978, my new friend, Debbie, invited me to go to the Assembly of God Church where Rick Howard would be speaking. He said, “I do not want to major on a minor topic in the Bible, so I only speak on this topic about once a year. Tonight I am teaching on how to receive the gift of tongues.” I knew God was answering my prayer. I felt like the preacher was speaking straight to me!

At the conclusion of his teaching, he said, “Often when you receive the gift of tongues you will have some strange words or syllables in your head. On faith just speak them out and don’t try to reason it out. It is kind of like walking on water. You have to trust the Lord to give you what He promised. If you ask for a loaf of bread, Jesus said, He will not give you a stone. We should come into His Presence expecting to receive. Come into the prayer room if you would like to receive your special prayer language.” When I went inside, there were about ten Christians already kneeling in there praying aloud and some were praying in tongues. I took a spot on the kneeler and Rick Howard began to go around laying his hand on each person’s head and praying for the infilling of the Holy Spirit and to receive the gift of tongues.

I have to back up in my story for a minute and tell you about a park in that area. It was called Gloria Duncan Park. The guys at The Way Inn were joking around about the name one day and said it reminded them of speaking in tongues. In unison said, “Shawn-da-la Bawn-da-la! Snatch-a-banana! Gloria Duncan!” It made us all laugh and was fun to say, so we all said it.

However, It wasn’t funny when I knelt in the line-up in that prayer room seriously seeking to pray in tongues. Sure enough all I could think about was “Shawn-da-la-bawn-da-la.” However, I made up my mind to be brave and just speak it out. As soon as I felt that hand on my head and spoke out those silly sounds, it was like someone had turned on the hose of a fire truck—a torrent of tongues poured out of me! I just kept praying in tongues and praying in tongues and was flooded with the joy of the Holy Spirit. It was so fun and so amazing I didn’t want to stop. Debbie prayed in tongues too and we started singing and praying together as she drove us back to the Birch House. We told everyone how I had gotten the gift of tongues that night. One woman freaked out like we had lost our minds and left to go hang out with her sane friends.

I have shared this testimony many times and have enjoyed the overflowing Presence of the Holy Spirit and speaking in tongues for 34 years now. What I have learned is that the more we pour out this amazing LIFE and the more we need, the more the Lord gives us. He delights to give us all we need for life in Him, and more, so we freely share with others. What my friends told me back in 1978 is true—THERE’S MORE!
Posted by Jenna Vick Silliman