Sometimes the joy is in the smallest of things

One common theme this week here at Kingdom Bloggers is that we all adore Christmas!

As I've been thinking about what to write about Christmas, I just kept thinking of some of the special Christmas moments I've experienced. Some of my fondest memories are the little things that happened, that seem to represent who someone was at that time in their life, or that showed their true heart. I figured I'd share a few of those:

It was the year when my sons were around 7, 3 & 2. Since I came from a home with very few Christmas traditions and I'd enjoyed every single one of those; I'd decided that when I had my own children, I'd work to establish meaningful traditions. I wanted to teach them the truth of how it is better to give than receive, and we did a lot of activities to that end. One of which was that presents were grouped under the tree by giver, and the big deal was getting to hand out those presents to the person for which you'd chosen it, and watch them open that gift. 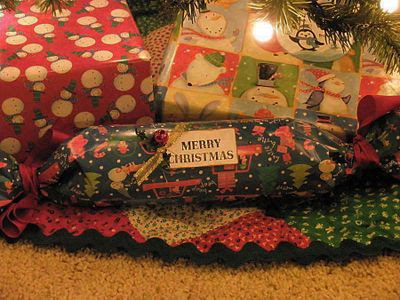 I'd taken each of the boys on a shopping trip for their father and brothers. They didn't have much money to spend but they enjoyed the whole experience of looking at the options and picking that one special gift for each person. My middle son was totally captivated by these plastic/rubber alligators (which he insisted were "dinosaurs") that he'd seen at the store. He even had enough money to get both a red and a green one for his oldest brother and he thought they were absolutely wonderful. I can still remember the look of glee on his face when he gave them to his brother; he thought they were so cool and was so excited to get to give them to his big brother!

A couple of years later the boys got into Legos, especially my oldest who by that time was around 9. The younger two boys had spent hours picking out just the right Legos set that they could pool their money together to afford to buy their oldest brother, and that they were certain he would enjoy. I can still remember a few days before Christmas when the boys and I were in the car and my youngest son was about 4 by that time. This 4 year old had been warned repeatedly about not telling what anyone got for Christmas because it was a fun surprise and he'd assured us that he was a big boy and could keep a secret. The boys were talking about presents and Christmas and the youngest pops up and tells the oldest how much he was gonna' love the Legos they'd gotten him. His middle brother and I looked at him aghast - he'd shared their surprise! He was totally unconcerned and looked at both of us knowingly and said "oh but I didn't tell him what kind of Legos!"

I can remember so many years when I was single, and we lived in a condo, and the boys were in late elementary school and early middle school. They relished the Christmas chain.

They would argue amongst themselves as to who would break the chain that morning and they'd see what activity we were doing for the Christmas season that day. Sometimes it would be to buy presents for project angel tree, or to bake Christmas cookies, or to do the advent wreath - whatever the activity, they were always excited because it all represented the overall joy of the season.

Every year we decorate the house and there are a few things that just seem to mean Christmas to our family. One of these is a large ceramic nativity set that I painted close to 30 years ago. We've put out that set, and the barn that I purchased to put the figures in and around, every year of the boys lives. Over the years however some of the pieces have broken and been glued back together. It's almost become a contest with my husband and sons as to who can do the best glue job, who makes it look like it had never been broken. But last year when I put out the set I could not find the head of one of the wise men. I looked and looked and looked but just couldn't find it. But I really like that wise man, and you just have to have three wise men. So I figured it is more about the effect than the details, who would ever notice that this one figure's head is missing. The set goes by itself on top of our fire place mantle. I'm part of a small group of women that meets two times each month at my house. We meet so that we have time set aside to invest into one another's lives; when we meet we sings songs of praise, adoration, and worship to God, we pray for one another, and we study the Bible together. Last year during the time we were singing, just as we finished one of the songs, Kathy looks at me perplexedly and asks "what happened to your wise man's head?" So much for no one noticing! (Yes I do still have the entire set out again this year. Maybe Kathy is the only truly observant person in my life!)

Things have changed so much with the passage of time. My sons are older and at that stage in life when they're much more interested in doing things with their friends, than with their family. But I notice that they still seem to appreciate the advent wreath time we spend together and still seem to enjoy the specific foods that we enjoy during the holiday season and on Christmas day. They still seem to like seeing what I've put into their stockings for them. This year will be the first year my oldest son will not be home for Christmas. He got married last May and he and his wife are both in the army and currently, because they are both in special training schools, they are not stationed together. But I think they will get to spend a few days together at Christmas.

What about you, what are some of your special Christmas memories?
Posted by Tracy

As soon as I stop laughing. "But last year when I put out the set I could not find the head of one of the wise men."

I like the chain - we scheduled a trip to Disney World when the kids were 5 and 8, and it came in handy to show them how far away 8 months was. It went all around the first floor.

Charlotte is just 7, and last year she couldn't sleep – we were having trouble staying awake to put a few things under the tree. So we filled her up with milk and when she used the bathroom we got it done. She thought we were upstairs the whole time. Then she went back down to resume her vigil, and found the cookies and carrots gone.

We had Christmas at midnight.

The one thing I always seem to do amid the festivities around our family and friends is go out side alone for a moment to relfect and give thanks to God for all that He has given me and my family.

It is usually so quiet you could hear a pin drop. It is then I realize what "peace on earth" really means.

No other time have I ever experienced such calm and peace in those few minutes alone praying to God and giving thanks.