The Potentate Was Late But I Wasn't 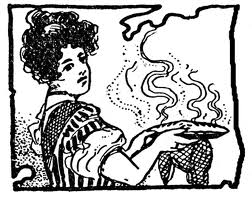 People think I'm a busy person now.  I don't.  I don't because I used to be so much busier.  I think I must have thought I was "super woman."  I wasn't.  I guess I just have some sort of strong internal drive.  It was the mid-90's.  Most of my children were still all living at home.  In fact, alternately we had a permanent house guest.  On top of that there were boyfriends, girl friends and other friends who would be in and out of our house.  It was not unusual for me to come home from a full day at work and put supper on the table for 16 people.  I could do all this within an hour of walking in the door without doing a magic trick.  And I want you to know there was no hamburger helper in my house.  It may not have been gourmet all the time but it was a good home cooked meal.

My job was no less demanding.  I was the Director of what was the largest Senior Center in the state.  This particular facility served people with disabilities of any age.  Housed in an old school building, it was a large facility where you could buy handcrafted items, visit the snack bar, exercise either with a class or with equipment, learn to paint and draw, get your toe nails clips and basic health services, see the Special Olympians practice or see the one of a kind, only 4-H group for children with disabilities in the state.  This was my domain.  I was over the whole business.  I supervised professionals and non-professionals, union and non-union.

So before this sounds like a resume rather than a blog, let me tell you just a bit about my church life.  I was in charge officially and unofficially of almost everything.  During the 90's I was the Sunday School Superintendent as well as helped lead the women's ministry. The church had no secretary so I did the bulletins and I also made sure there was toilet paper in the men's and women's bathroom every Sunday morning.  I told you I thought I was super woman.  I love it.  I loved being busy.  I loved serving people at my job and at church.  I miss those days.

It was September.  It was time to start thinking of a Christmas program.  Rather than a simple pageant fitting a small church, I decided to take on a full musical.  By a strange chain of events, I came across The Great Late Potentate.  I listened to the music.  I read the script - It was delightful!  Enlisting the help of a music teacher who went to the church, we started.  Parts were assigned, cassette tapes were given out and the mayhem began.  This now occupied all of our Children's Church time throughout the Fall. 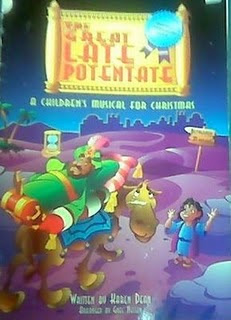 There was excitement in the air.  A seamstress in the church got busy and made costumes for the children of Bethlehem.  The children were to tell the story of the year the four and missing Wise Man finally showed up in Bethlehem, a "one camel town."  A teen boy was asked to be the Potentate.  He came from a rough neighborhood and wasn't a church boy.  He did great.  The night of the performance he was turbaned and ready to go.

I directed from the church balcony.  We made it a multi-media presentation. I had slides made that actually went in a carousel projector to highlight certain parts of the story.  Selected people had headsets hidden under their head coverings so I could give directions from my perch in the balcony.  That night there were more people in the church building than had ever been there before.

It has always seemed miraculous to me that a program like this seems doomed for failure during the last rehearsal and is wonderful in front of the audience.  It's no less miraculous than the multiplication of loaves and fishes.  But there was another miracle that year.

I am always doing Christmas shopping on Christmas Eve.  It is rather quite comical that I bring home gifts, wrap them and that same evening we open them - we always open presents on Christmas Eve.  As I prepared for the Potentate, I still had my demanding job.  I still had to cook and clean and do laundry.  At work December meant a budget had to be prepared for submittal to the Town Council.  The Town Manager wanted every penny accounted for, an analysis of every program with a cost per unit was required.  All this and Christmas shopping had to be done.  Nothing could wait.  And on top of that there were rehearsals for the Potentate. 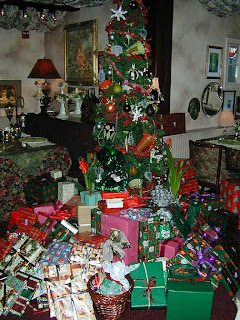 There is one year I was ready for Christmas with all my shopping done by December 15.  It was that same year that I directed the potentate.  I remember so clearly thinking, how did this happen?  To me it was a miracle.  A voice inside me told me something - it said:

the little boy with the loaves and fishes gave all he had and put Me first, put Me over his own needs, not only was He fed but everyone was.  Joyce, you put me first this year, you put the Kingdom of God and these precious children first - now I've multiplied your energy and time - the gifts are bought and under the tree, your budget is done - now Rest in Heavenly Peace

I can picture Joyce with the headset in balcony.

Thanks for such a thoughtful story. I guess I should be getting used to them, but I am not.

LOL - thanks David. I try.
I miss those days -- but I miss a lot hear in SD so I am just trying to deal with it.

Joyce!! What can I say? You amaze me! Well, maybe what I should say is that the way God moves through you amazes me!!!! I love the way you write AND the stories you tell!

I continue to be impressed. God is just so good and it's cool to read more of your story