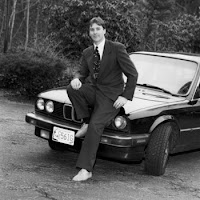 As we grow in relationship with Christ, and begin to hear the voice of the Shepard, we may find ourselves deeply in love with Jesus. I did.

As I began to experience God’s presence-- as I heard His voice and looked for His divine steps, I realized for the first time that I could fail Him. For so many years God was at my service, He was to meet MY needs. Sure, I also wanted Him to meet your needs, and those around me. But something was impersonal about the arrangement; even selfish and a bit childish.

One day, I was praying and running errands in an old junky car that I was borrowing from a friend at church. I had been unemployed for about 6 months and I was just starting to get caught up. My new business was doing well too. As a company we were able to give and to be a blessing to our employees. That same morning, as I drove by a used car dealer not to far from my home, I saw a black 1988 BMW 325, and on the windshield was written $4999 in fluorescent yellow numbers. I heard the Lord say, “I want you to have that car.” Although I was used to hearing from God on occasion, this time it seemed selfish. After all, a good Christian does not need to have a nice shinny BMW! I felt like I didn’t really deserve it and I dismissed God.

That same afternoon I drove by the car again and I heard the Lord say, “I want you to have that car.” I thought, you know, I should stop and at least look, but I didn’t. I drove by it again two more times in the next day or so; finally I pulled up next to it and got out to take a look. The salesman came out to great me and asked if I wanted to take it for a test drive “It’s a nice car and it won’t last long.” He said. He opened the door, started it up and turned on the Blaupunkt radio. It was so sweet.

I said. “I am little busy right now, but I will drop by later. I just live down the street.”

Later never came, and the next morning as I drove my kids to school, I looked over to see the BMW that God wanted me to have. It was gone! Like a missing front tooth in a six-year-old’s mouth, the car was gone. I slowed to see if it had been moved to another place on the small lot, it wasn’t there.

After I dropped off the girls, I drove by again to look into the service bay, it wasn’t there either. My spirit sank. I knew that I had not obeyed God. I had tried to figure out how He would pay for it, I’d been too busy to listen, and worse, I had been given a number of chances. “God,” I said as I began to cry, “I am so sorry for not listening.” I sobbed all they way back to my office. All day I thought about that car; about disappointing God -- I felt miserable.

That afternoon I decided that if God wanted me to have a BMW, then I would go and get one. I took my kids after school and we drove to every car dealer in town, and some that weren’t. I could not find one BMW, any year, any make, any color-- not one. I took the kids home and went in my office. I was beside myself. I cried out to God again, and asked Him to forgive me. The Heavens were silent. After dinner I went to visit a couple of more gas stations that might be selling a used car—and hopefully a BMW. I knew it was a long shot. These last few places usually only had about five to eight cars on the lot. As I slowed to pull into the last one, there was no BMW there. I sat in the parking lot and was solidly convicted for not obeying God.

I heard that still small voice. “David, if you want a BMW, then you need to go to the BMW dealer.”

I was flabbergasted. I am sure it makes sense to you, however; I never would have thought about the BMW dealer. The prices would be high; even for a used car, and it just seemed so far out of my league. But I went, and I went now.

As I pulled into the parking lot at the local BMW dealer-- the one place I did not go -- as I turned the corner near that service department, there sat a black 1998 325 2-door. Not just the same car, but the exact same car with $4999 written on the windshield in fluorescent yellow numbers. I got on my cellular phone and called the dealer that very minute. “I am very interested in the black BMW 325 that you have out front, can someone please call me?” After all it was 9:30 at night, and they had closed.

Sunday morning came, and I left a second message on the way to church. No one called and drove by to make sure that it was still there. Finally on Monday morning, the phone rang. The salesman said, “I am calling about the 325, we don’t have a title for the car, and we don’t know when we can get one. Can we show you something else?”

In my mind, I am thinking, you have no idea what I have been though, if you don’t sell me that car, God is going to strike me dead!” But out of my mouth came these words. “No, I want that car; may I come leave a deposit on it in about 10 minutes?”

“I am sorry sir, but we can’t take a deposit until we have a clear title.”

I covered the receiver and look at the sky. “God is this some sort of cruel joke?” I was ready to start crying again.

I said the man on the phone, “I really want that car, please let me know when the title comes in.”

“OK, God, now what?” The heavens were again silent.

I went about my day at the office and I was convinced that I had done everything that I could to please God. I went off to the bank and got in line for the teller. Suddenly I realized that I didn’t have enough cash to buy the car. I decided to talk to the manager and see what my options were. After a quick credit check, she informed me there was no way they were going to give me a loan as a self employed person in my first six months of business.

On the way home I asked God where he thought I was going to get nearly $6000 for taxes, registration plates and insurance. I didn't get an answer.

About a week later the phone rang and it was the car dealer. They had a title to the car. Me, I didn’t have the money. I told them that I couldn’t get there that day, but I would tomorrow. They didn’t seem to mind. I confess, I was thinking maybe this whole thing was me, and not God. I was just mulling it over in my head and went out to get the mail. I was expecting a check for $6000 for a job that I had done for Kraft Foods and I was told it would take 90 days to get paid for. Again, it seemed just enough out of reach; I began to doubt the whole process.

About 4 pm, there was a knock at the front door. There was a man at the door that I had never seen. He handed me an envelope and said, "This was delivered to my house, and after I opened it, I realized it wasn't mine. I am sorry I didn't get here sooner -- I have had it for almost a week." It was the check I had been waiting for.

I went to get the car that night.

Thank you God for being relationship with me, and being concerned about all these details!
Posted by David-FireAndGrace