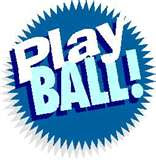 I read one time that 'An analogy of God is like viewing the Grand Canyon through an empty toilet paper roll in the rain', or something along those lines.  I gotta agree, because if a person keeps breaking down an analogy of The Infinite, Holy God, eventually it will fall apart. So please keep that in mind as you read this entry.

Monday, was opening day in baseball.  I have followed the sport distantly since the strike in '94.  There have been historical moments that drew back in, as well as the Twins and Cardinals doing well.  But my enthusiasm for baseball is nothing compared to my passion for football and MMA.

Anyways, think of the Kingdom of God as the World Series. Only two teams get to play in the series. Two teams that have met the qualifications that is required. Each team had to win its league and prior to that each team had to earn a spot in the playoffs. All 30 teams start the season with the goal of winning the World Series. All believers in Christ want to inherit the Kingdom of God.

Imagine the opening day of baseball as Salvation. On opening day, every team begins with a fresh start. Some have more going for them than others because of a higher payroll or better players, but all begin the exact same, 0-0. Just like the believer that has confessed Jesus as Lord, (Romans 10.9-10) every person starts with a clean record.

As the season progresses, some teams excel and others fail. This is sorta like people’s faith. Some grow stronger, get better in their Faith and others, and just fall behind. Does Major League Baseball eliminate teams from baseball because of horrible play or bad management? Nope! And Salvation is similar, once a person has it, God ain’t taking it away. (2 Corinthians 1.22)

Just like with the Kingdom in which not everyone gets in, every team that in MLB will not get to the playoffs. The teams that do get to play for the league pennant have met the qualifications. They have persisted when others have quit, they have overcome adversity from outside and from within and they have earned their spot in the playoffs.

So, after being Justified by Faith (Ephesians 2.8-9) in Christ, what initially qualifies a believer for the Kingdom? Baptisms! Water and Spirit. (John 3.5) If you have one without the other, it’s like tying for the division lead, but losing a tie breaker. Or its like getting swept in the divisional round of the playoffs. You aint qualified for the Kingdom without the Baptisms.


Are those the only requirements? Nope, just like getting in the playoffs doesn’t mean that team will be playing in the World Series. Those that will inherit the Kingdom, have played by the rules (Mark 12.30-31) and have been victorious when it mattered most. The teams that do the best in the League Championship Series, no matter how convincingly or pathetically they did it, they are the ones playing in the World Series.

And ultimately, Faith is not about rules, it is about love.  A love for God and for others that compels us to sacrifice wants and needs for the blessing of others. (Romans 12.9-13) Unlike, the World Series, no one knows for sure who will inherit the Kingdom and who won't. Yes, we know that the Minnesota Vikings (football), Detroit Red Wings (hockey), Ben Henderson (mixed martial arts) and the Iowa Hawkeyes (college athletics) will  never play in the World Series because they don't play Major League baseball.  Just the same with those that choose not play God's game of Eternity. It is obvious that some will never Inherit the Kingdom because of the evidence of their lifestyles.

But too many times, believers get caught up in what everyone else is doing and they ignore what Holy Spirit is leading them to do. Too many times, people get caught off base, or they never take the bat off their shoulder or they get injured and choose to quit.  Some people get so caught up in the rules (written and unwritten), the 'integrity of the game', or the drama outside of the game that they don't play up to their potential.  Some people don't even hear the umpire yell, "Play ball!"

What about you? Are you ready to play ball?
Or are you stuck holding a wet, empty toilet paper roll?
Posted by TeVeT

You're a freakin' analogy genius Tvedt...

I'm looking so forward to your parts of the book.