Gee – thanks David! You don’t make it easy for the rest of us to come behind you. Nonetheless, I’ll give it my best shot.
David mentioned a controversy about the Holy Spirit in his blog yesterday. Today, with much fear and trepidation, I want to comment on the perhaps one of the most controversial areas in all of Christendom, Eucharist, Holy Communion, The Lord’s Supper or whatever other term you use for it.
I’ve mentioned many times before, or if you read my blog Sounds of Hope, you’ve heard me talk about the church I grew up in, Salem Gospel Tabernacle.  To say that I love and highly esteem my childhood spiritual experience is an understatement. Equally understated is to say I was blessed. 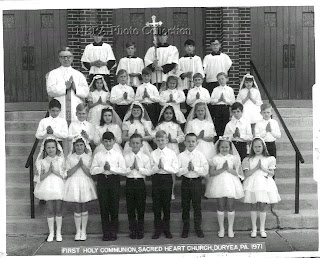 Nevertheless, I used to envy my Catholic friends who got that white dress and looked like brides when they made their first Holy Communion. When I was a very small child, I never saw communion in our church. It was reserved for the monthly Tuesday night business meeting. Weekly the saints would gather for prayer on Tuesday and then once a month, they would have communion together during their prayer/business meetings.
They strictly adhered to “closed communion.” If you weren’t a member, you couldn’t partake of the Lord’s Supper. Baptism by immersion was required for membership. Once baptized, you were a member of the church. The two went hand in hand. The elders and pastor would meet to discuss whether you were old enough to thoroughly understand and were in a position to become a voting member of the church. They were strict to say the least.
Somewhere in my early childhood, they decided to do communion on Sunday morning. I think it was because too many people were unable to come on Tuesday evening.  At the conclusion of the service, at the last hymn, Pastor would announce anyone who was not a member was free to leave the service. There was one woman who was so faithful to the church but could not become a member of the church I think because she was divorced. I always thought that was sad because this same woman moved in the spiritual gifts in the service. Even as a child I wondered how she could be excluded from membership but yet God seemed to approve of her.  When the announcement was made, I would see her scurry for the back door.
My mother always brought cookies to keep me quiet in church. It was a very necessary bribery. I saved two of my cookies on the Sunday there was Communion. When Pastor would say “Let us all eat together” I would put the first cookie in my mouth and chew. Then when he would say “Let us all drink together” I would put the second cookie in my mouth and try not to chew too noticeably.  I noticed a heaviness settle over the group as they started communion. One of the elders would start a spontaneous hymn. Then the feeling in the sanctuary would change drastically as Communion was over. I always felt like we were aware of our need for the Savior as we started Communion and were relieved of our guilt by the end.
I’ve been learning a lot about Eucharist. I have been learning the terms transubstantiation and consubstantiation.  I’ve been learning that Eucharist is much more than a memorial or symbolic. I am still unsure of exactly what it is but I know it is important to understand and participate in the Lord’s Table. I know Christ is present when we do in some mysterious way that is bigger than what I can understand. 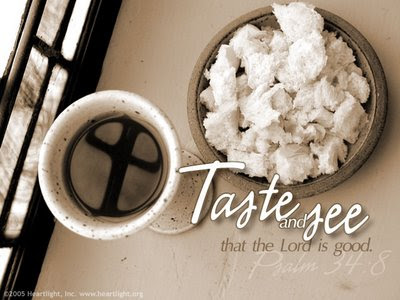 One of my classmates in theology has put it very well:

What matters is that in communion we both give and receive from God, we both speak and are spoken to by God, we both taste and see God as well as God sees us and in a figurative way taste us, i.e He gets a sense of what we are like as we approach and partake of the table. "Taste the Lord and see that He is good" we are told.

For me communion entails far more than I could say here. For communion is where we meet God, were we receive His grace.  If the church [Kingdom] is not communion, than what is the church, other than a meeting place, not unlike the Eagles? But the church is the body of Christ in which the world is given the opportunity to take part. Taste and see that the Lord is good!

Another mentioned that Wesley saw Eucharist as a converting sacrament.
Kingdom dwellers need to partake of the table of the Lord, the thanksgiving feast and share it with the world for which Christ died. Communion is a big deal in the Kingdom. What does it mean to you?
Posted by Joyce Lighari

Communion is not a suggestion from the Lord. Paul talks about the "reverence" we should have for it.

Like everything else, we need to hear God in communion. The Greek word means a very intimate connection (actually the word is also used for sex). God's desire is to come close to us as He envelops us in the power for His death and resurrection which is what we are to remember. We are to feel His pain, understand the depth of His sacrifice and be part of the power of the resurrection.

I have found communion to be a bit odd. As young child in a Catholic school and church, I had no clue why I had to do this.

It wasn't untill I was an adult at a later age that I trully understood what the communion represented as stated in the Last Supper.

Today I will not take communion per say in a church dictated way. That I now do on a private and personal way in worship to the Lord Jesus by the breaking of the bread and pouring of the wine. I feel the thin waffer and grape juice routine just don't cut it for me.

The main reason I feel that way is I need to be in a close relation ship with the Lord and feel His presence. Then I can take the communion in good faith.