Not Matthew, Mark or even Luke...I'd probably had been a Saul. by Tony C

Most people are identified by what they do to make a living. That fact is especially true for men because one of the very first questions someone will ask when meeting a male for the first time is 'What do you do?' People in the Bible were no different. We often closely associated what major figures in the Bible did for a living. This week, your Kingdom Bloggers will share which occupation we feel each of us would have worked back in biblical days.

My first inclination was an association with Matthew the tax collector (or Zacchaeus, I'm a short dude). I love Matthew and his role in Christ's ministry. I'm also a business-minded individual. But if I'm completely honest with the topic, I know in my heart yours truly would have most likely been a Pharisee during the days of Jesus' earthly ministry. 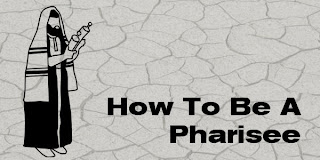 Yes. That's what I said. The middle-classed members of the religious rule often worked their way into position by their dedication to education. Unlike their Sadducee counterparts, most of the Pharisees came to wealth through work...not inheritance. They were politicians and more closely related to common people. Many were in the priesthood, but often at lower levels in the hierarchy than the Sadducee.

Jesus didn't have kind words for either group as it were.

Saul of Tarsus is the most famous of the biblical Pharisees...at least until he met his Maker on the road to Damascus. We often forget that Saul was going about in a very effective way doing what he thought was right and good. Jesus set him straight, and the rest is history...as they say.

My love of politics, business and education all point to my conclusion that I would have, most likely, been a Pharisee (not to mention I dig those Jedi looking outfits). However, I do like to think that when confronted or exposed to the Truth that was/is Jesus Christ...I would have been smart enough to follow Him.

My real history bodes well that's the choice I would have made too.