A sermon can contain many messages...by Tony C


I've been very fortunate to have had several great pastors in my lifetime. I've written about two of them before here on Kingdom Bloggers. This week, we will each be sharing a favorite sermon from a past service. A message that stuck in the wheel well, so to speak, and provoked deeper thought or study after hearing it.


On September 30 of this year, my friend Derek preached his last sermon as my pastor. I knew it was coming. I had prayed for him diligently as he prepared for the transition. He was on a path he felt God put before him, and I tried my hardest to submit to God's will...even though I really, really didn't like what was about to happen. 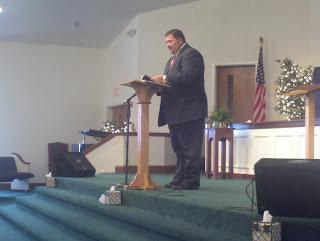 For his last sermon, my friend and pastor went back to the very outline he had preached ten years earlier as his first sermon where I attend church. He had preceded my coming to the church as the new pastor just months before I started attending.

As I write this, I know in my heart God knew I needed a man like Derek in my life. Someone who would challenge me spiritually in an encouraging manner. His words on September 30 still echo through me today.

But, not because of the message he preached from II Kings 6 on the faithfulness of God. While it was a great message, it was his words before he preached the message that resonated with me deeply. He told the congregation before his very first message at our church that he called his dad from his office to ask him to pray. Derek was nervous and needed the reassurance only a parent can often give. He also shared he had done the same thing that very morning before coming from his office to the church for services.

As Derek spoke about his father, about his parents, and what they meant to his life, I knew with a strong conviction that I longed to be that kind of father for my own daughters. Not just the spiritual example I'm charged to be by God's word, but to also really be there for them whenever I'm needed and for whatever I'm needed for at the moment.

Life makes such a vow or commitment often more difficult than it sounds. My expectations may sometimes conflict with a path one, maybe all,  of them may chose. Their decisions may lead me to believe my head might actually explode from frustration. My heart may get broken again and again with disappointment.

Yet, through it all,  I need to be there for each one of them...when they need me...to reflect the very same reassurance I get from my Abba Father. To demonstrate that their father loves them unconditionally and completely with a love only surpassed by their Heavenly Father. I will not leave them. I can never forsake them.

Thanks for the enduring lesson my dear friend. Thanks to your dad Mike too for being that light of love.