Jenna is on a ministry trip in Germany. Today she asked me, her husband, to write for her about the theme this week: faithfulness. 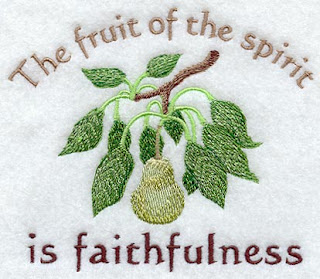 In Luke 16:10 He who is faithful in what is least is faithful also in much; and he who is unjust in what is least is unjust also in much. It surprised me to see that the opposite of faithfulness was being unjust. It made me realize that faithfulness was related to relationships. My grandfather Arthur Tansley was one of the most faithful, just people I have ever met. I never had the chance to tell him. He died less than two months after I became a Christian. He spent most of those two months in the intensive care unit at Alta Bates Hospital in Berkeley after having a series of heart attacks.

I was too self-absorbed as a teenager and a young adult to appreciate not only what my grandfather did for me and my family, but who he was. He not only raised two daughters through the depression but when his youngest daughter, my mom, got divorced when she was pregnant with me, he opened his home to her and her two sons. His word was gold. He spoke seldom but you could count on what he said to have his full commitment. I have many memories growing up of people letting me down, but my grandfather never let me down—not once. He had his ways that would drive you crazy or would make you smile and shake your head, but everything I learned from him I can count on.

I learned from him that being late to something is a sign of dishonor. I still think that showing up five minutes early is being late. Once I visited a church and no one showed up until 15 minutes after the starting time listed in the paper. I never went back.

I learned about having someone’s back from watching him love his wife, who had at times severe mental health issues. Grandfather modeled faithfulness in everything he did. I desire to have that kind of faithfulness in my life.  I see what raises its head up against it als--my selfishness and my thought patterns that put me first.

Jesus, I look to You to do that transforming work in me, to continue to grow me in faithfulness. Your scripture says that fruit is faithfulness, so Holy Spirit bear fruit in me, I pray. Manifest Your new creation in me in such a way that I might be faithful. May You be glorified, Lord Jesus, through me because of faithfulness.
Posted by Jenna Vick Silliman

Cliff...
Thanks for doing the blog and letting us hear about a good man...your grandfather.When you mentioned that he was true to his word, I remembered when I went to a Teaching given by a Christian Native American woman.She talked about her hsuband and how , his people's contracts, were their word. They honored their word.
I had also heard a similar thing about being late...gulp...I stand convicted.
Thanks for stepping up to the plate. Hope Jenna is doing great.
Linda