I was in High School and was invited to a party that included the “in” crowd. I was surprised I was invited but thrilled at the same time.  When I was there, I did what I normally did at that age, when I encountered situations that I felt inadequate about or wanted to “fit in” (don’t worry I didn’t do it yesterday!) and that is, I drank.


I know a lot of young people drink and it is not a big issue for them. But, unbeknownst to me, I had a physical  and genetic  predesposition to alcoholism.  I had already been drinking over 5 years and I can remember feeling proud that even guys would say “ Boy, you can really hold your liquor!” I thought that was a great compliment…I was in …I was noticed…I was cool.


This night, as I went to leave, this really kind boy told me that he thought he should follow me. I was driving alone and I welcomed the “protection” I don’t think designated drivers were in vogue in those days…so I know he notice my condition and was trying to help me. I can clearly remember it, as if it was today, how I drove.  I went very slow and used the utmost concentration, often looking in my rear view mirror to make sure he was following.


The next time he saw me, he told me that I was really drunk and I was all over the road…swerving here and there. I was truly shocked because I thought I had it under control (usually a wrong concept we can have about a lot of things).  I was embarrassed too…I felt I was caught and also that I let him down, as he was the one who invited me to the party.

Did I think, oh my gosh, I could have killed someone? No…did it even enter my mind, I could have crashed the car and got seriously injured or killed.  No. I was more worried about how I appeared to others.  He told me the truth though and in a way, it was a confrontation.


I wish I could say that, from that incident, I could see that alcohol already had the power over me, but I wasn’t ready to face the truth, yet.  There came a day, after much pain that I caused myself and put on my family…I was ready to admit that I was powerless over alcohol;. This past June, I celebrated 32 years of Sobriety…it was truly by the Grace of God. I went into treatment and joined AA and as they say…the rest is history. 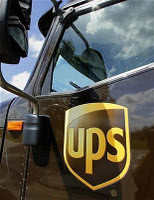 Another, trip was a little jaunt down Main Street of my town. As I was approaching a stop sign, in the right lane of the 2 lanes, I noticed a UPS Truck parked in front of a store. The driver parked there, but his truck was partially in the lane I was in.  Depth perception has never been one of my strong points, but I ascertained that I had enough room to get by and by golly I could do ALL things through Christ who gives me strength. Not sure if that is really the prayer I prayed, but I know I uttered something…probably something like


As, I was right near the truck and thinking I had accomplished landing this plane ( my car) perfectly ( oh oh…there’s that word again).

WHACK…SQUEEL…CRUNCH!!!
The sound was unmistaken…Yikes I didn’t clear the narrow path!  He stared in unbelief.


I got out of the car, as the UPS guy came around the truck and we both stared in unbelief. I had not only hit the rear of the truck but my car was now hooked onto his bumper. It was not going to be a case of slowly baking up. He then came up with a brilliant idea. He said, with a lot of confidence that I am glad he had…” OK, I will go in the truck and rev the engine and go in reverse, as you do the same but go forward. He thought that would “un hook” us.

I liked this, a UPS man with confidence.
Well, by that time we had an audience at this intersection. I tried my best to follow what he said and was hopeful it would work.  Well, it happened all so fast…but it did work and I was free!


Putting my car in drive, pressing the pedal to the floor, off I went. I think I got caught up in the moment of being free.  When I got home and told my husband and son, they were like “ You just drove away? You did not exchange insurance info or anything?” they were incredulous.Half expecting a call from UPS Headquarters or the Police I waited. Remember there were a ton of witnesses.  As it turns up, I never got called and it would've been a hardship as our car insurance was $1000 deductible.


I thought this was God’s grace and accepted it as much. I WAS willing to face the consequences that never came.


The third leg of this journey is a time that I was speeding down a country road in one of the towns in CT, that I regularly traveled on.  I wish I could say that I was think deep thoughts about God, but I am pretty sure I was in a zone.  All of a sudden…

TWACK and BOOM…
before my eyes, in the windshield line of vision, was a huge bird. It's black feathers blowing all over the place I had NO idea what I hit but I plowed into this bird and his brother. His brother continued into the woods, I am sure thinking  "This woman is crazy!”.


It happened so fast, I wasn’t sure if I ran over the bird, when it slid down my hood or what happened. As I looked in my rear view mirror…he still was walking, albeit, slowly. I also am sure he thought I was not only crazy but a violent maniac.


I was shaking a lot and pulled my car over to the side of the road to gather myself.  Soon, a policeman came by to ask if I was ok. I was still “under the influence of bird maiming”. He held back his laughter, I am sure and suggested I stay there for a while till I was less shaken up.  One thing I found out about these birds from him, was who they were. I thought they were doo-doo (pronounced dough-dough) birds. I had a nun in grammar school who called all students that she thought were inept or stupid (her judgment)…doo-doo birds.
This all came back to me when I hit them.  The Trooper said if that they were Wild Turkeys. Well, unbeknown to me…they could fly…well not too high…yes only as high as my hood. 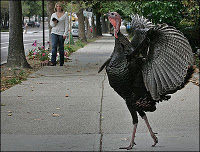 As I was sitting there I thought of a couple of things, I left the house kind of depressed and this sure shook things up for me. Then I took this as kind of a “sign”. I am not sure how y’all feel about “signs” from our ordinary world around us and God speaking to us through these. Well, I was in the midst of a messy personal situation and I just felt like these birds, in a way in that, I am going about my own business…being me…and this person is just plowing through the path…speeding and having NO thought for anyone else except THEIR destination. You see I keep blaming myself and asking myself incessantly…could I do something different??? Was I wrong??? Am I just seeing the truth and yet am thinking all along that I am only judging? Well I got my answer that day and I was freed.


Well, all these combined, may lead you to believe that perhaps this… I should not be driving…at the very least , you should be warned about when I am on the road.

I’d love the company…I just steer clear of drinking, avoid UPS trucks and granting the right of way to wild turkeys.
Posted by It's Something Beautiful

Not driving Ill agree with that! Love the Batman sounds!

Welcome to the group; thanks for sharing.