Write Down the Revelation

I want to be a writer, preferably a paid writer.
It’s either irony or it has to be God. It could be both, but mostly I think it’s God. I hated writing papers in school. I've never journalled and yet, I feel as if I have a lot to say and teach.
I write about my introduction to blogging in my post, The Appointed Time, and I skirt around the issue on my About page.  I started by writing a Christmas newsletter – no wait, before you roll your eyes, hear me out. My Boy had just been born and I wanted to have to tell the story only once. I laid it out like a magazine, and called it the New Yorker – you know, because my Boy was the new York (Andrea York, get it?) I included a section called, Listen for God’s Laughter (I still love the heading) and wrote a short testimony because I knew it was going out to a large number of unbelievers. Since it was Christmastime, I figured people are a little more open to hearing about Jesus.
I continued to write the New Yorker each year, not because I wanted to brag about my family and our latest holiday but because it was an open forum to bring the Gospel to people who don’t hear it otherwise. And a funny thing started to happen; I received positive feedback about my writing. I knew it was a God-thing because I wasn’t good at writing.
The first time I came across Habakkuk 2:2, my heart leapt and I knew God was speaking to me. He was giving me new revelation about Himself and the Word, which needed to be shared with others.
Over the years, I tried different ways to communicate. I’m creative by nature, so I experimented through scrapbooking and through other visual concepts but it didn’t feel the same as when I was simply writing – tapping the keyboard of my computer.
Fast forward to 2011 - in less than 5 days I received two prophetic words about writing books, and I knew it was time for me to write. A book seems too daunting right now, so I’m practicing with a blog. I also don’t have a real idea for a book concept, so I’m waiting on God for that too. Blogging is my way to stay obedient to the call, be consistent and to practice and hone my writing voice and style.
I’ve only been blogging for 9 weeks and I’m still in the honeymoon phase. I love it and it doesn’t feel like obedience, but rather a gift. I’m encouraged by the response I’ve received, right from the first week but I know that unless the Lord builds the house, the workers labour in vain. I’m confident God gave me the desire and the revelations to write about so I’ll be faithful and watch what He does with it.
I write posts at my own blog, Write Down the Revelation on Tuesday, Friday and Sunday. If you’ve never stopped by, I’d love to see you there. 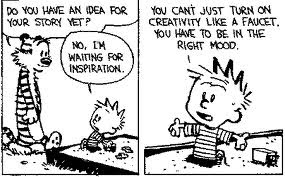 Labels: Andrea, Why I Blog

It's interesting to read about how God put the desire to write into your spirit. I know I've enjoyed reading what I have of yours so far.

Interesting - I looked that verse up again and almost used it myself yesterday... Great blog!

Voice and style? I gotta long way to go! Love to have you on board, and when you are ready to write a book, I have an idea for you....

Thank you for using your ability for His glory. I'm so glad you joined our team on Kingdom Bloggers too. We are better at serving with each other.

Keep writing! God has given each of us words to give--to few or to many, but just the right readers for what we write.