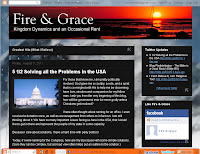 One day I sat down at my computer; it was a fall day in 1998. To my surprise my friend Holy Spirit came powerfully upon me. For a few minutes I was completely engulfed by the presence of God. At the end I felt inspired to write about the Wedding in Cana. I began to type an email, and when I was done I sent it to about a dozen friends from church.
This week the Kingdom Bloggers are going to talk about why they blog, their motivations and the need that it fills. As Christians, God speaks to each one of us differently, and he also gives us gifts for expressing the voice within.

The story behind my blogging is far more than a good idea that popped into my mind one day. Even though God creates a destiny for us before we are knit together in our mothers womb, I wasn't aware of his plan for me to write until a Saturday morning back in January of 1998. I was attending a conference in Connecticut with some pretty well known speakers, neither of which I had ever heard of at the time.

I sat a table during a leadership breakfast, and listened to Denny Cramer minister prophetic words over leaders from the church where this conference was being held. First, I don't know how I got in the meeting, but I was invited. Second, I was here only on the recommendation of a friend; I didin't have a clue. Third, I was not a leader anywhere, nor was I participating in any ministries at my own church. And finally, I sat there and wondered what God would say to me through this man, if I even was chosen to receive a word.

Then, as I was finishing a fork full of scrambled eggs, I felt his hand on my shoulder. He began "Son there was a time"...

There was a number of important things in the word he gave me about leadership, missions and prophetic ministry. What was most intriguing was this line: "and God says you will write, write, write!"

I was skeptical, but those words burned in my spirit. I listened to the recording over and over... there was just something about it that I can't explain. I also wondered if God knew that I had failed English and reading 9 out of 12 grades? Didn't He know that I had a form of dyslexia? I thought maybe he had the wrong guy... but the words burned in my heart.


Not too many months later I began to write THAT email. A friend liked it so much that he sent me about 100 email addresses for my list. As a web designer I set up a site entitled Time After Time and people from around world signed up for my daily messages - that's right, daily. I wrote 500 eamils in less than two years time.  My list was 30,000 readers from 81 countries. Some of my emails were pretty rough, but one of my readers was a journalist and taught me some basic grammar skills. My mother, an English teacher and grammarian at Yale, bought me a copy of Strunk and White's The Elements of Style. I tried to learn.
I am still not much of a writer, but God doesn't really care about my vocabulary and grammar... He just don't!


After my divorce in 2000 I stopped writing the daily emails, and other than some teachings for our church newsletter, I didn't really write again until I started blogging in 2006. I decided to mess around with some political rants, and then one day I decided that I wanted to write a book about me and Jesus. I thought the blog would give me a way to tell some of my stories of faith. I thought that eventually I would have enough material for a book. It worked. I penned a book entitled From Darkness to Light - The life of a bumbling Christian and his God. It is out for a second round of proof reading as I type these words. I have found a great editor, and when I can come up with the $800 to pay him, I also think I have a publisher that will take me on - I think - I pray - I feel like it's in my destiny.
My blogging was a chance to write about my frustration in the church, my love of family, some funny adventures I have had, moments in life that were meaningful to me, as well as a chance to have an opinion about politics and other subjects that interest me. At this point I have written about 1000 blogs in 5 years time. I used to be pretty religious about asking God what to write about, now I just go with whatever is happening. However; far more importantly, I get to write about my life with Jesus, my testimony and honestly, when I write those blogs, I could care less if anyone reads them, they build my faith.

Since my heart trauma in April I have had a hard time feeling ambitious about much of anything... in fact I am taking on guest bloggers over at Fire & Grace to keep a steady flow of blogs. If you are interested, just let me know, and maybe you can have a slot!
Posted by David-FireAndGrace

Labels: David, Why I Blog

Gosh David I didn't know all of this. It never ceases to amaze me how God works so uniquely in each person. Looking forward to hearing in the not too distant future that you're book is published and out on the market.

Like Tracy, I didn't know your story, which is why I'm excited to hear from everybody this week.

Your writing and ideas is what drew me to your Fire & Grace blog several months ago and I'm looking forward to being able to drop your name in conversation with others when your book comes out (of course, it would be with total humility and no sense of personal pride).

As far as the season in your life right now, I can feel the heaviness of your heart. I feel inspired about the way you are still moving forward in faith despite the heaviness. Be encouraged that you are a fore runner to God replacing the heart of the global church. It's never easy to carry that burden. Be encouraged my [older] twin.

Your right God doesn't care that much about vocab and grammar - He cares about the heart - HOWEVER, you do wonderful with writing - I do believe it is a gift and you have it.

You are an inspiring writer my friend. Never doubt that, but more importantly, never stop serving Him with that gift.

You are always in my daily prayers.