What the Heck is a Hamantaschen Anyway? - Touching the Untouchable

This week we have been talking about unique opportunities to minister the love and grace of Jesus. We've added a new Kingdom Blogger to our Tuesday spot: Joyce Lighari. She is a seminary student in South Dakota - a friend in the Lord and fellow world wanderer for Christ. She's a real writer, a teacher, a preacher, a mom, a grand mom, a wife and host of other things that she can tell you about in the next weeks and months. 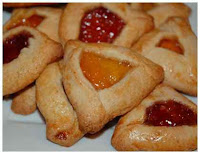 Recently I [Joyce] did a paper for school. I am always doing a paper for school. This topic was to be a time I gave pastoral care to someone. Why is it that you never can remember something when called upon to do so? It was like what? Me? Did I ever minister?

At last, I thought of Rose. Rose was in her 80’s, Jewish, suffering from a dementia, confined to a wheel chair and living in a dementia unit at a relatively posh assisted living facility. I would see Rose once a week as part of my job. She rarely made sense. Sometimes she would scream for her husband. Nevertheless, I liked Rose. She was loud and Jewish. I think she reminded me of where I grew up, Brooklyn.

It was March and Purim was nearing. Purim is the Jewish celebration built on the Biblical story of Esther. I had asked Rose about her spirituality. She would sometimes light up when I mentioned something about faith. I decided to purchase a children’s book on the story of Esther, some Hamantaschen (a pastry known as Haman’s ears), a few noisemakers and help Rose celebrate Purim. I was going to make the dementia unit into a synagogue for a few hours.

It always was dark in the dementia unit. I never quite understood that even though I understood about dementia well. Rose and four of her fellow residents were sitting around a table. Everyone had that blank dementia stare. No one was interacting.

I sat down next to Rose and told everyone we were going to celebrate Purim. Rose did not respond. Rose was the only Jew in that unit. I told everyone that in the synagogue on Purim the scroll containing the story of Esther would be read. Rose nodded. I asked Rose what do we do when we hear the name Haman? No response. I said we are going make noise with these noisemakers or say boo. They practiced unenthusiastically.

I started to read. I read from a children’s picture book about Esther. We heard the name Haman the first time. With great coaching, they booed or made noise. I could tell Rose was beginning to listen. It was as something started to be switched on in her soul: the soul, that part of a person with dementia that stays intact and reachable, if we try. We read another page or two and the boos and noise got louder.

I got to the fourth page of the book. Rose stopped me. She started talking about Heiman, her husband. In the mind of a person with dementia, it is not a far leap from Haman to Heiman. I let her continue.

She shared with increasing lucidity about the trip she and her beloved Heiman took to Europe. I tried to get back to the story, to my program, but fortunately, I did not succeed. Rose continued. On the trip, they were too afraid to go to Germany. Much to my amazement, she said, “we were too afraid to go to Germany because Hitler was like Haman, he wanted to kill all the Jews.” I nodded.

She further shared how they met a German woman in France who asked her to forgive her country for what they had done. I realized something more important than reading the book might be going on at this point.

While some of what she said wasn’t clear, it was clear that she was remembering a wonderful trip. She was also connecting Hitler and Haman. She began to weep. She asked “Why? Why did he want to kill us?”

At that point, another resident, equally suffering from dementia looked at Rose. She said I am “German, my family is German, will you forgive us Rose for all the terrible things that were done?” Rose nodded through her tears. The woman was also weeping. Two women, who minutes before were in the foggy land of dementia came out for a few minutes to forgive each other.

It was a holy moment. It was a moment of forgiveness and reconciliation. I will never forget that day. It was ministry at its best in the most unusual of places. Ministry that I never expected would happen.

As I saw the residents begin to slip back into the surreal land of dementia, I thought it time for Hamantaschen. I poured a glass of juice for all the residents and we ate our Hamantaschen together. Before I left, Rose had to show me the picture of her precious deceased husband Heiman. She did this every time I saw her. While on the surface nothing had changed, I believe her soul was more at peace when I left that day.
Posted by David-FireAndGrace

Every time I read this - four times now - I just can't believe the love that God has for mankind. The tender moments - ones where His presence touches the very souls of His beloved creation. So personal and perfectly orchestrated, a perfect fabric knit together for His eternal purposes.

I am looking forward to your book. :o]

Hi. Came from sister Tracy's site [Abundant Living]. Nice to meet you. That was a funny post about "coffee"...God bless.

A wonderful story and yet so sad about dementias effects.

Thank you for sharing this Joyce. I'm here with tears in my eyes feeling gratitude for our great and loving God.

Wow, that is a beautiful story. Thanks for sharing it, Joyce. I've got tears in my eyes.