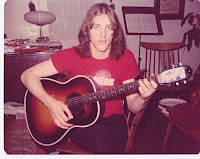 This week your faithful Kingdom Bloggers are writing about a person who influenced them in their walk with Christ. As believers, we should be led by the Lord, but certainly He puts others in our path to accomplish His purposes.

A few years ago, at a evangelism home-group, we were asked to think about who might have been instrumental in getting us to the starting line in our walk with Jesus - then write them a letter. Here's mine:

I hope this letter finds you well. I know it has been many years since we last saw each other - over 20 in fact.

The reason that I am writing, is this: today our pastor was talking about evangelism and he asked us to think about how we got saved. During his talk he reminded us how God had first pursued us; most likely using someone else, as opposed to a divine encounter such as the one which Paul had on the road to Damascus. I began think about how the road to my salvation unfolded, and continues to do so . . .

As the pastor spoke, he gave us an assignment, which was to write a letter to the one that made the most impact in our decision for Christ—in my life that was you. There were others involved in the process, most of them from Cursillo. But it was you who said the words that caused me to believe in Jesus. Possibly you remember the struggle I had with all of this Christianity.

I hope that you’ll indulge me for a moment while I recount the story. In 1978 I came to believe. Then there was the first Cursillo which was a disaster for me - you were there to pick up the pieces. Before the second Cursillo, you and I talked for hours—possibly days. You patiently told me about Jesus. At some point you said, “Just believe and He will meet you where you are.” Silently, quietly, as I lay in bed one night, He did. I suppose it would be fine if the story ended there, but it doesn’t.

You encouraged me to read 9 o’Clock in the Morning; giving me a copy! I wanted faith like that, faith that believed in the supernatural, faith to be intimate with God. With the help of Fr. Folsom, I became baptized in the Holy Spirit. You were there for my confirmation. You were the one that taught me the truth of Romans 8:28. You were there when I gave the "Study" rollo on my third Cursillo. I am not sure if you are aware, but that same day God called me to ministry. I didn’t really get it then, but I do today.

I moved to Cape Cod in 1985, and it seems that the Spirit of God led me to the wilderness. For five years I was on my own without a spirit-filled community; just dead religion. Satan literally tried to kill me on two occasions. Yet, in the midst of it all, I remembered the promise that God gave me in a sunset.

In 1990 God apprehended me from the desert and I was rekindled with a fire so great, I was actually asked to leave two churches - too much passion I guess. That rejection was what led me to the mission fields of southern New England, North Carolina, Brazil, Norway and the UK. In Brazil I preached to 12,000 people in 21 days. Thousands received prayer, got healed and came to know Jesus. There is so much more God has given me the privilege of being a “vessel to do.

So, thank you Duncan for being the most important messenger God has ever sent me.

PS - I still teach a little guitar, work as a software engineer and I treasure my Oxford Musical Dictionary. I have been sober for 27 years and smoke free for 13. Our God is good all the time.
Posted by David-FireAndGrace

Two Churches? Let me guess. They didn't believe in the Gifts and Super natural powers. I have been through that in the past.

Thank God they did not succeed in dampening your firey passion. It would have been a sin.

@Larry - at one I just raised my hands during the Doxology!

It's awesome to hear how God's worked in you life. We have a good God. I'm so grateful that He pursues us and has a plan for our lives.

I recognize the picture from Norway. I want to go back! It was awesome and so are you :-)

I have been visiting various blogs for my term papers writing research. I have found your blog to be quite useful. Keep updating your blog with valuable information... Regards