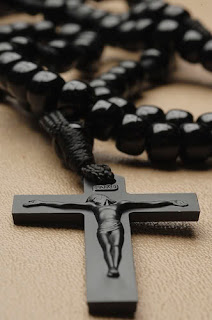 And being found in appearance as a man, He humbled Himself and became obedient to the point of death, even the death of the cross. Therefore God also has highly exalted Him and given Him the name which is above every name, that at the name of Jesus every knee should bow, of those in heaven, and of those on earth, and of those under the earth, and that every tongue should confess that Jesus Christ is Lord, to the glory of God the Father. Philippians 2:8-11

I went to Catholic church growing up, I can't say I was raised Catholic because my Dad didn't practice and I rebelled against it as much as I could. Before we could 'join', my older sister and I were required to meet with the Monsignor and memorize some prayers - not really understanding the purpose. Why it was important for us us kids to attend and not my dad and why we had to "learn" our way into becoming a Catholic made very little sense to me - but definitely bothered me.

Eventually, mass and cathechism became more of a battle of wills than a disagreement about beliefs between my old man and me. I would skip mass as much as I could, sneaking a boom box out of the house and hanging outside a couple blocks away from the church listening to Kool Moe Dee or Anthrax. My Dad and I came to blows over it one night, when I got busted for skipping catechism. He snuck back to the house after I snuck back to the house instead of going to class. Words escalated quickly and tempers rose even quicker and my bedroom became a MMA cage. And this was fine with me, because during this whole time I was missing the Thursday night class.

I dabbled with Catholicism a wee bit after living on my own, I guess in some way still wanting to earn a Father's approval. The more I tried to understand what is was for me to be Catholic, the less I wanted to be Catholic. In the end, my passion for drinking eventually washed away any need for Mother Mary and her beaded necklace. Eventually, my life was on the verge of being completely wiped out by a tidal wave of alcohol, drugs and selfishness when God washed me clean.

Faith was something new, inviting and real. I wasn't getting twisted up in praying to dead people about specific issues, I was taking my prayers directly to the King. I decided my christening as an infant wasn't enough. I decided I should be the person that decides my need for Water Baptism. I was enthusiastically learning about the role Holy Spirit and understanding how much greater of a Help He would be than just reciting the same couple of prayers over and over. The Word by itself was filling my mind and my heart, removing the frustration of practicing dead religion.

As I grew in my Love for Jesus and Holy Spirit, I found myself still holding some bitterness towards God the Father. Understandable, considering how I was "raised" and how I never could meet expectations at home or at church. I kept the Trinity separated and sorta kept the Father at arms length as I grew in my Faith. I easily accepted what Jesus had done for me, delivering me from booze and willingly asked for more of Holy Spirit in my life. Even so, I still found myself distant from God because of my misperception that He already had one perfect Son, so He was going to always be disappointed by anything I did for Him. I somehow had it in my mind that there is little I could ever do to please God but I still had to. Somehow I had it twisted up that perfection was required of me and I knew it was impossible because I wasn't Jesus.

Then one day when I was reading chapter 2 in Philippians and in verse 9, the word "therefore" jumped off the page at me. It changed the way I thought about the Lordship of Jesus and how I viewed the Father God. Holy Spirit used those nine letters to alter my thinking about living for God.

I understood that Jesus wasn't Lord because of who He was, it was because of what He did. Because He was obedient, God rewarded Him with the Name above all Names. Because Jesus chose to live His life as a servant, to live His life to glorify the Father, God rewarded Him accordingly.
I realized I would be rewarded for my words and deeds accordingly as well. I realized that God is generous in how He rewards His kids. What Jesus did for all of us is something only Jesus could do. That is why God's reward for Jesus is the greatest reward given to any man. Therefore, God would be generous to reward me according to my efforts based upon my obedience to Him. Therefore, I wanted to be obedient to Him and seek Him wholeheartedly. Therefore, I could let Him wash away the bitterness and misunderstanding that religion had imposed itself upon my relationship with Him. Therefore, I could believe that God is a loving, generous Dad.
Posted by TeVeT

Praise to the King for all that He is able to accomplish in our lives - for His grace, His mercy, His love, His arms open wide.

The word "therefore" is used over 1200 time in the Bible - meaning including all that was said before.

John 20:25 The other disciples therefore said to him, "We have seen the Lord."

Therefore meaning all the miracles we have seen Jesus do, all that He preached, and all that He said and did has caused us to say, "We have seen the Lord."

I recall going to Catholic school as ayoung lad and having to go through the cathechism rituals. I think mostly the fear of the nuns with their brutal punishment if you were bad turned me off.

I was thankfull when my parents ran out of money to send me to the Catholic school after 3 years and started public schools. Only problem with that was I was way ahead of the other students in public schools.

It was when we all started going to a new Souther Baptist church that I felt God was a loving God. There began my journey on again and off again for a long time untill the last few years.