Seeing Red - God Knows Your Need Before You Ask! 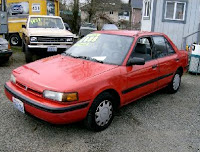 There came a time when I was unemployed. In the midst of my lay-off, I lost my company car. As I stood watching from my bedroom window, listening the sound of clanking chains and whirring hydraulic pistons, the tow truck came and took it away.

It was a tough time. I was renting a room just after my divorce. I had lost a job working for the company that I sold my Internet start-up to. I hadn't even had a chance to open a new bank account. The prospect of a car loan without a job was a stretch.

I honestly didn’t know what I was going to do, and I needed wheels.

The next day I borrowed a car from a friend at church to do some errands over the weekend. My daughter Erin and I were chatting as we stopped here an there. She was in the third-grade at the time. At 8-years-old she had gotten radically baptized in the Holy Spirit; showing a real propensity to hear from God. She turned to me and said, “Dad, don’t worry about the car, you are going to get a check for $2000 -- no $3000.”

I remember thinking that is such a long shot. I just looked over at her and smiled. Apparently my smile gave away my lack of faith. “No, really, God says.” She added.

I was regularly running a young adults group -- 13 to 33 -- that was hosted by a couple from my church. These kids were somewhat outcast from the regular congregation. They found Jesus in the excitement of the Holy Spirit’s presence.

Over the months prior, I had been teaching them about about character, faith, prayer and the spiritual gifts. Some of them were learning to pray for healing and others were prophesying. At the end of the meeting that Tuesday night, I asked them if they would pray for me. As a minister, I don’t often ask for prayer from those that I am ministering to. However; this night the Holy Spirit was exceptionally present during our meeting - I thought I'd take my chances.

One of the girls began. “I am seeing a small car.”

Another added, "I see you with money, yes, you are going to have a car by the weekend."

I got a ride home from a friend that was co-leading the meeting. He wasn’t very convinced that the prayers were of God. I shrugged my shoulders as I walked up my driveway - I wasn't so sure I was convinced either. I tossed a few worship CDs in the changer, got in bed and trialed off to sleep listening to Robin Mark and David Ruis.

The next day; Wednesday, I spoke with my pastor, and asked if he knew where I could find a car. Honestly, I was “fishing” hoping that the church would help me out in my time of need. He said he didn’t know, but he’d be willing to give me a ride to get some groceries and drop by my Post Office box. I was hoping that my unemployment check would be there so I could get it in the bank.

I twisted the key to the box lock and reached in grabbing a few pieces of mail and a couple of ad circulars; no unemployment check. There was a credit card statement and a letter from my mother. It seemed odd to receive a letter from my mother. We spoke regularly on the phone; usually about once or twice a week. She would always send a birthday card, which was a long way off, and a Christmas gift, which I had already received. I hadn’t told her about the car in our last few calls, but she did know that I was unemployed. I opened the letter, which read.

“David, I was praying for you, and I decided to send you this check. Enjoy life! I Love you, Mom”

I was so stunned I kept reading the amount. “Three thousand dollars and no/cents: $3000! I went and got in the pastor’s car-- I could barely talk. I just held the check out for him to read. “Well,” he said, handing me a folded check, “Here is what the church is able to do to help.” After he dropped me off, I unfolded his check which was in the amount of $150-- the exact amount I would need to pay the sales tax on a $3000 car.

I called my daughter and she was very excited that I had received the check just has she had spoken. “I told you, Dad!” she quipped.

“Ummm, no, actually that is my favorite color. God said it's red.”

That night I met with the young adults group again. We got together almost every night. I made an arrangement to look for cars the next day with one of them who was not working. He and I stopped at one place, and I drove a red two-seater - well it was kind of maroon. It was more money than I had, but I liked the car and thought maybe I could negotiate a lower price. I took it for a spin, but the clutch was making noise and I decided against purchasing it. I stopped by a few used car lots, looking at mostly red and green cars. Nothing stood out to me, and everything was out of my price range.

The next day the parents of one of the younger kids in my group offered me a car to go looking again. I hit a few of the smaller lots around town. There was one that always seemed to have cars in my range—two to three thousand dollars. I pulled in, eyeing a beautiful green 4-door sedan. It was loaded with every option, leather seats and priced at $3295. So, I asked to take it for a ride. Alone, as I drove around town, I decide to call one of the girls in my group that seemed to have a real prophetic gift. “I am test driving a car, what do you think?” I didn’t give her any information.

She replied, “I had a dream last night about you driving a red 4-door, is it red?”

I went back to the lot to look around a bit more. There were a couple of other red cars; only one was in my price range. I asked for an ignition key, the salesman put a dealer plate on it, and away I went. The car, a Mazda Protegé, void of all creature comforts -- not even a radio or automatic transmission -- oddly it had A/C.

As I negotiated traffic, trying out the brakes, shifting gears and testing the acceleration, I reached over to see if the A/C worked. As I touched the switch, I heard that still small voice. “You can drive this car to Florida.”

This was an odd confirmation to my friend’s dream-- but it was a red 4-door sedan for $3295. I decided that I was pretty sure I had the right car, the one the God wanted me to have. As I sat at the traffic light just before the dealer’s parking lot, I decided to put out a "fleece" like Gideon did. "Lord, if the salesman will give it to me for $3000, I will take it. Amen" That was my prayer in Jesus' name.

As we walked into his office, he said, “Oh, I don’t think that I can do anything on the price.”

I pulled out the cashiers check for $3000 and put on his desk facing him. “I have cash, and I have it now.” I said. “I am going to buy a car before the weekend; do I need to keep looking?”

“I was going to change the oil, and put new wiper blades on it, but if you want it like it is, then we have a deal.” He reached over to shake my hand.

“We have a deal.” I said. After a few minutes he slid the purchase agreement across the desk and I signed it. Then he passed the title of ownership to me with a sales receipt. I took them to the Registry of Motor Vehicles and got my plates. It was Friday about 3. I had a car, a red 4-door - and right before the weekend!

Just a few months later, my plane tickets were canceled for a vacation I was planning with my kids. So, we got in the little red Mazda and drove it from Cape Cod to Orlando and back! Let me tell you, the A/C was very enjoyable that warm week in April.
Posted by David-FireAndGrace

God never ceases to amaze me!

I look forward to reading more from your book...wait...your book? When did that happen?

God bless you for sharing His work in your life.

I have been working on a book for 3 years - I started the Fire & Grace blog to collect stories about my wonderful Jesus. Last winter, I took a couple of weeks off to assemble it, fill in the blanks etc. I wrote nearly 100 pages. I had hoped to self-publish it by last spring. I spoke with 2 editors, and the second one started to work on it. Then came the unemployment -- the new job, and I dropped it. Apparently it is not quite time for it.

Well David it certainly looks like the Lord has been looking out for you for quite awhile. When the time is right, the book will get published.

I also think God has plans for you as a minister but I don't think it will be a brick and mortar Church as you might think. Something new and some thing different from what I can tell.