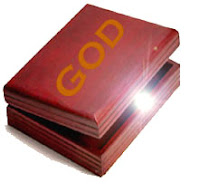 This week we'll be talking about how God has stretched us - or God is bigger than you think!

I had a pastor that often said you can't put God in a box. If you visit ExChristians.net you'll see the unbelievers think that the box is empty. However you look at it, the Creator of the Universe won't fit in a box.

Christians are often limited by their experience and the teaching they have had. They are limited because they primarily rely on getting their information from others: sermons, books, blogs, conference speakers, Christian Radio and the like. That rounds out the menu of spiritual consumables. Reading the Bible, or worse, only certain parts of it, can easily lend itself to a personal interpretation. I haven't met a Christian yet, that didn't have favorite Bible passages and Christian authors. Nor have I met one that wasn't confidant about some portion of their personal belief system.

As humans we primarily perceive things; even God, with our senses and feelings. I suppose the problem with perceiving things, even the things of God with our flesh: body, intellect and emotions, is that our senses can easily be unreliable truth receptors. I could write a heretical lie in this blog, and yet for some, it might even resonate as some sort of truth. Here is an example that I hear all the time. It is often said, "Money is the root of all evil." However; the Bible says this: "The LOVE of money is the root of all evil." (1 Timothy 6:10)

The reality is that the truth of God can only be perceived in our spirit; the one meant to commingle with the Holy Spirit. Paul called this process of knowing God, "spiritually discerned." He was not referring to the use of the intellect. That is why Paul prayed that God would open the eyes of the Ephesian's hearts. (Ephesians 3)

These spiritual perceptions are God speaking to us - the still small voice. Everything else that is "godly," which we are encouraged to think on, are not. (Philippians 4:8) Even our response to the very text of the Bible needs to be discerned by the Spirit. Otherwise, any concoction of biblical belief can quickly become a lie or gross misunderstanding, masked in partial truth. We have seen this many times with cults, during the crusades, the KKK and other pseudo-Christian groups. Even Satan twisted the Scriptures as he spoke to Jesus in the desert.

This is the place in my own life where God was WAY bigger than I thought. My God needed to be able to do the miraculous - changing the weather, providing funds where none existed, healing the sick and yes, even raising the dead!

I finally had to give up figuring everything out with my brain and wrapping it in my limited experience, and lack of faith! In short, I had to enter into a relationship with Jesus - one where He could do what He darn well pleased - one in which He spoke to me personally! Within that relationship, God would confirm or reject my thoughts and feelings about scripture, things I read, and about things I "sensed" He was doing. I began to hear His voice.

As a Charismatic Christian, I grew up around folks praying and speaking in tongues. For me it became very normalized. I never questioned it. From what I could see, there seemed to be some supernatural power in it as I witnessed folks getting healed by people using this strange language. I came across tongues, and their use, in the Bible (1 Corinthians 12 - 14). Those experiences, and my interpretation of the scripture were my "God box." Of course there are lots of folks that don't believe tongues are for today, have no use for them, or quietly let them sit on a shelf. And that is their "God box."

I purposely chose a controversial doctrine to make a point, that is exactly how we put God in a box. (For you Bible scholars check out Genesis 11:7 and Acts 2:6) Whatever our belief is on a particular subject, that becomes the gospel we preach, and it may be a crippling one.

It is a fact, entire denominations are formed around a few highly illuminated scriptures. The 4 Square - Acts 2:42, the Baptists Mark 16:16, the Pentecostals - Acts 2:1-4, as well as some religious traditions such as priests not being married - 1 Corinthians 7:27-35. These denominations were founded by folks that got a hold a certain truth, one in which God was very active, and made it their own.

I could pick an entire list of "God box" subjects including: transubstantiation, eternal security, predestination, casting out demons, second marriages, and woman in ministry, just to name a few. Everyone of these topics limits God and cripples the church, regardless of which side you are on.

Please don't hear what I am not saying. Sound theological doctrine is essential for the Christian church. Study and show yourself approved!

I happen to believe that there is only one perfect theology, and no one group has it nailed down 100%. It does mean that some folks are wrong. Why? Because they put God in a box that they understand - too bad God can't be put in a box.

We can't just read God's will off a page and go through the religious motions without it connecting to God. Remember, real Christianity is a relationship, not a religion. If you read the gospel accounts, that is exactly what the Pharisees did. Jesus, however; called them "whitewashed tombs," while John called them a "brood of vipers." The Pharisees heaped on a fair amount of church tradition to their interpretation of the Torah, leading a generation far from God. And worse, the Sadducees made up their own version of the scriptures which didn't include the resurrection of the dead!

We might get saved by faith, but we must operate "in the spirit," and hear the Shepard's voice. It is the cornerstone of the ministry to which we are all called - hearing God's voice and doing it.

If you are not hearing God's voice like you wish to - HERE is a prayer from last week that you can start praying to get you going. Hearing God's voice is an essential part of the Christian life. I have written about it in more detail HERE and HERE.

When we hear God's voice, whether through an illuminated scripture, a thought while reading a Christian book (or blog) , God speaking to us in our circumstances; the opening and closing of doors, or during prayer, we must step out in faith and be obedient if we are called to act. If we don't, then our great God is in a box that even He can't get out of.
Posted by David-FireAndGrace

Labels: David, Faith, God is Bigger than You Think

Interesting posts you have, though I think Christianity is dead and will be redeemed and brought to fruition and perfection through Thelema. Check out my blog at http://christianityisdead.wordpress.com/ if you will. Love is the law, love under will. ;)

The Book of the Law with its Law of Liberty and 'Do what thou wilt' philosophy are by no means new. The beliefs behind Thelema are as old as Satan's vanity and the serpent in Eden with the temptations of 'you too can be as God.'

People who refuse to accept the sovereignty of God have made up their on rules for life all through time and are allowed to do so only because He allows such a choice. Christianity has survived for over 2000 years based on an innate longing embedded in every human being to reconnect with our Creator. We are made in His image and create at His pleasure.

I agree that throughout history terrible atrocity have occurred by people claiming to be in God's service. Tremendous acts of charity and love have also been carried out in His name. From the example left for us by Christ, I'm inclined to say the latter is more attuned to His will.

I'm saddened that you feel Christianity is dead but assure you if you visit this blog weekly...you can find the writings of several people who feel quite the opposite. The death of Christianity has been predicted time and time again since Jesus walked the Earth, yet here we are, Believers, 2000 years later still bringing the message that God loves you and wants to get to know you; however, that choice is up to you.

What a blessing to discover your writing. Very well said. I also appreciate your non-condemning way of supporting your own beliefs when confronted by someone like "Thelema". I will continue to check this blog out and look forward to future posts. If you have time you can check out my ramblings, I would appreciate your feedback and would like to share my personal experience and ministry with you. I'm a Science Fiction author that gets paid be being a Technical Writer for a huge international company. I won't spam your blog here with my links but if you want to connect let me know; 411tom@gmail.com -- Warm regards, Tom Roe

Periodically I find that I've been operating out of a "God box". I'm grateful that God doesn't leave me, or anyone else, where we're at - but will grow us in Him, if we'll let Him. Thanks for the encouragement to stick with God and keep seeking Him with an open heart as I read His Word.

Yes, Tracy, God loves us enough to love us where we are at, yet not so much that He lets us stay there. Just think if we were the same folks we were when we first received His grace!